Entering 2021, the worst of the aviation industry's COVID-19 downturn may be behind us, but the pandemic's impact is not. Just how long its effects will linger is an open question, but the road to recovery looks long and winding. Here's the 2021 aviation industry outlook as of writing.

The aviation industry outlook we published just 12 months ago already feels like it's from some distant past. At that time, rosy growth predictions made it seem like the industry's good times would continue indefinitely. But what a difference a year makes.

The COVID-19 pandemic put the aviation industry in a crisis much deeper than those that followed both 9/11 and the Great Recession. A long stretch of sustained growth was stopped in its tracks in 2020 and the next several years will be spent trying to simply get back to pre-COVID levels.

It will not be easy. Many of the factors that will determine the industry's recovery are out of its control and even the most connected insiders can’t accurately predict where the industry will go from here.

For this article, we have pored through a number of reports and forecasts in an attempt to gauge the industry outlook for 2021 and beyond. Although the situation looks daunting, the industry has shown its resilience before and will undoubtedly get back on its collective feet. The big question is: When? 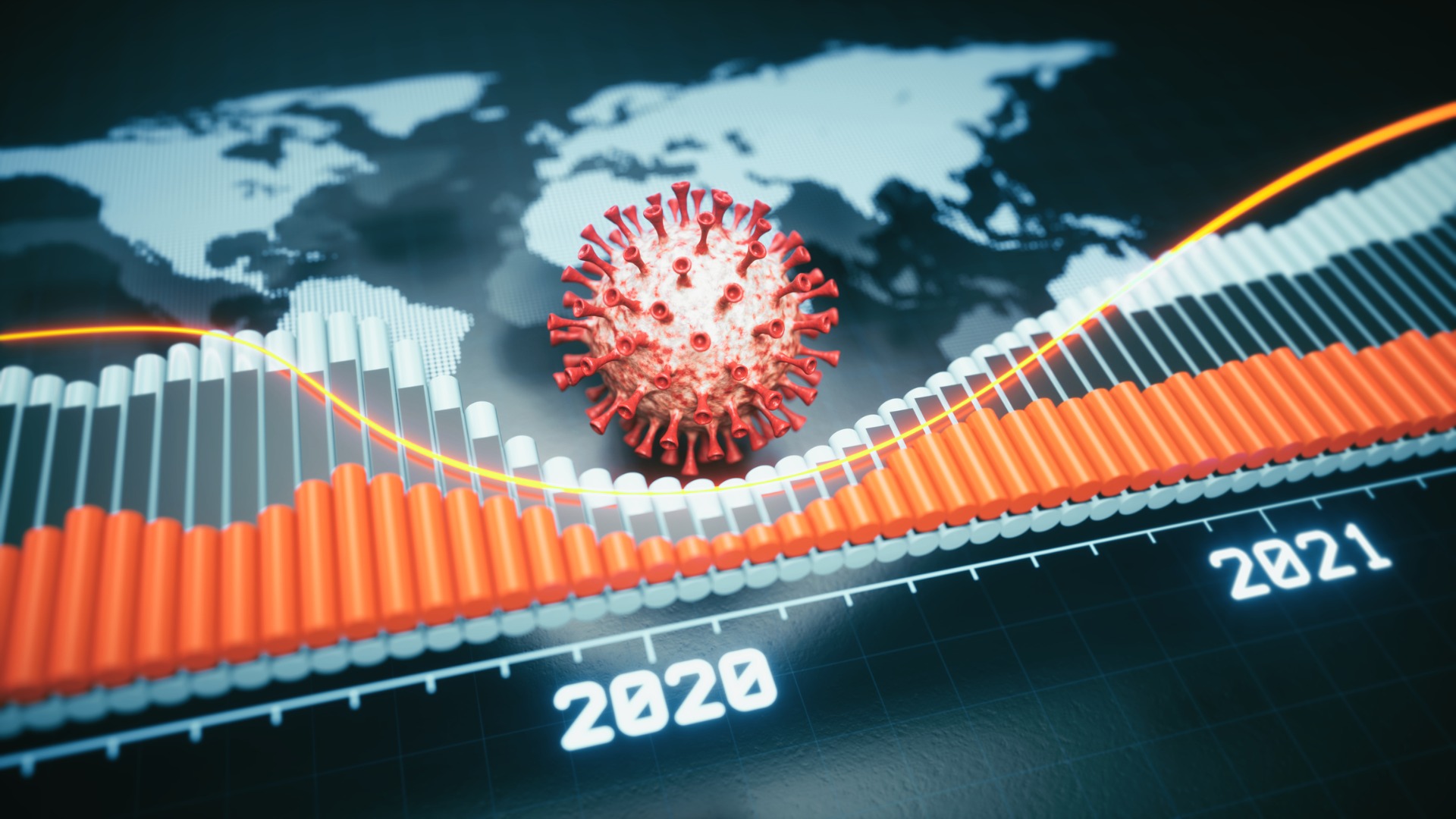 Uncertainty about the course of the pandemic

At the tail end of 2020, the world received its first dose of good news in quite some time when vaccinations began in the United Kingdom and the United States. By early January 2021, millions of people in dozens of countries had already received their first shot.

But even as optimism swells around a vaccine, cases and deaths continue to rise unabated. Even in the most optimistic scenario, it will be months before vaccinations have a significant impact. Further complicating the situation, new and more infectious variations of the coronavirus sparked a new wave of travel restrictions and border closures that present yet another hurdle for the aviation industry.

In short, health authorities can’t say for certain when the pandemic will be under control and life can slowly start returning to normal. 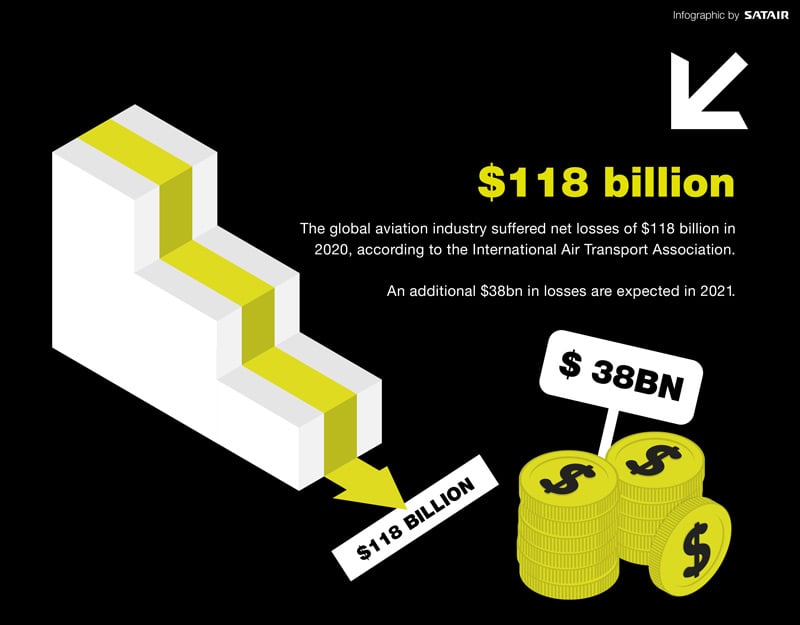 The economic recovery will take time

Even when vaccines have significantly slowed the spread of the virus, the economic downturn caused by COVID-19 is expected to continue in the aviation industry and other industries alike.

A United Nations Conference on Trade and Development (UNCTAD) report released in late November 2020 reported that the global economy retracted by 4.3 percent in 2020. Although that is a bit better than initial forecasts, the COVID-19 recession brought the “fastest, steepest downgrades in consensus growth forecasts” in decades, according to the World Bank. The UNCTAD report warned that the economic impact of the coronavirus will be “deeper and more widely felt” than the Great Recession that followed the 2008/09 global financial crisis.

It's estimated that some 300 million people worldwide lost their jobs as a result of the COVID crisis. These job losses are likely to have significant and lost-lasting impacts on the global economy. Workplace closures and the wider economic turndown have hit labour markets hard, with the International Labour Organisation estimating that global income losses amounted to $3.5 trillion, or 5.5 percent of global GDP, in the first three quarters of 2020.

Just as public health experts can’t accurately predict what will happen with the pandemic itself, financial experts also differ in their recovery forecasts. But one thing most agree on is that the economy is unlikely to return to pre-pandemic levels until late 2021 at the earliest. With travel and tourism both dependent upon, and vital pieces of, the global economy, the airline industry can also expect a slow recovery. Just how slow is up for debate, but some experts don’t expect a return to pre-COVID numbers until 2024. 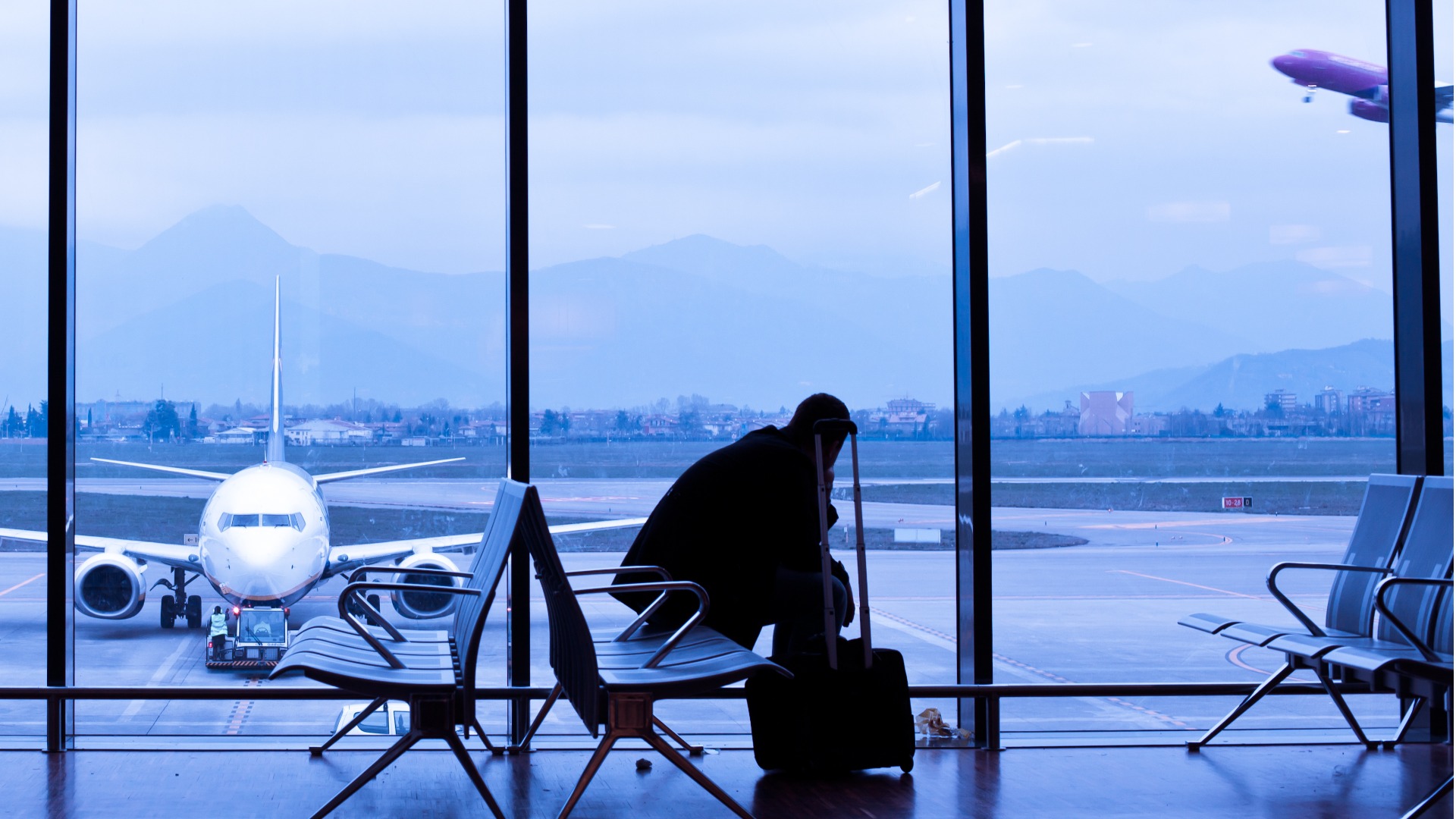 Why the recovery is expected to be so slow and difficult becomes clear when we examine the extent of the COVID-19 damage to the aviation industry.

After several years of healthy and steady growth in airlines' total revenues, RPKs (Revenue Passenger Kilometers) and overall traffic numbers, 2020 marked an abrupt end to what many expected to be a prolonged golden age for the industry.

Rather than continuing the pattern of sustained growth, 2020 instead ended up as an absolute low point for commercial aerospace.

“Financially, 2020 will go down as the worst year in the history of aviation," Alexandre de Juniac, the CEO of the International Air Transport Association (IATA), said in a June press release.

In a good reflection of how a bad year seemed to just keep getting worse, de Juniac's declaration was based on the IATA’s June estimate that the industry would lose a combined $84.3 billion in 2020. By the time the agency released its year-end report in November, that loss estimate had been increased to $118 billion. An additional $38bn in losses are expected in 2021.

These losses were driven by the severe limitations on air travel during 2020. Lockdowns, border closures and safety concerns virtually grounded all air traffic in the early part of the pandemic and even when it was technically possible to travel, passenger demand was not there. 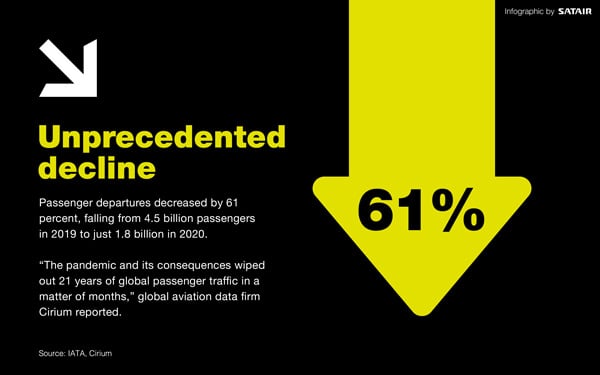 Global aviation data firm Cirium found that passenger traffic fell 67 percent in 2020, bringing the industry's numbers down to a level not seen in decades.

"The pandemic and its consequences wiped out 21 years of global passenger traffic growth in a matter of months, reducing traffic this year to levels last seen in 1999," a press release accompanying the report stated.

The report added that airlines operated just 16.8 million flights in 2020, only slightly more than half of the 33.2 million flights operated in 2019. Due to border closures and steep drops in business travel, the vast majority of 2020's completed flights were domestic, with international travel accounting for only 23 percent of the year's air traffic.

IATA's year-end report from November was a bit more optimistic, estimating that passenger departures decreased by 61 percent, falling from 4.5 billion passengers in 2019 to just 1.8 billion in 2020. Total passenger departures are predicted to climb back to 2.8 billion in 2021, but even if that prediction bears out, this year's totals would still be the lowest the industry has seen since 2011. No matter how you slice it, COVID-19 effectively wiped out years' worth of passenger growth. 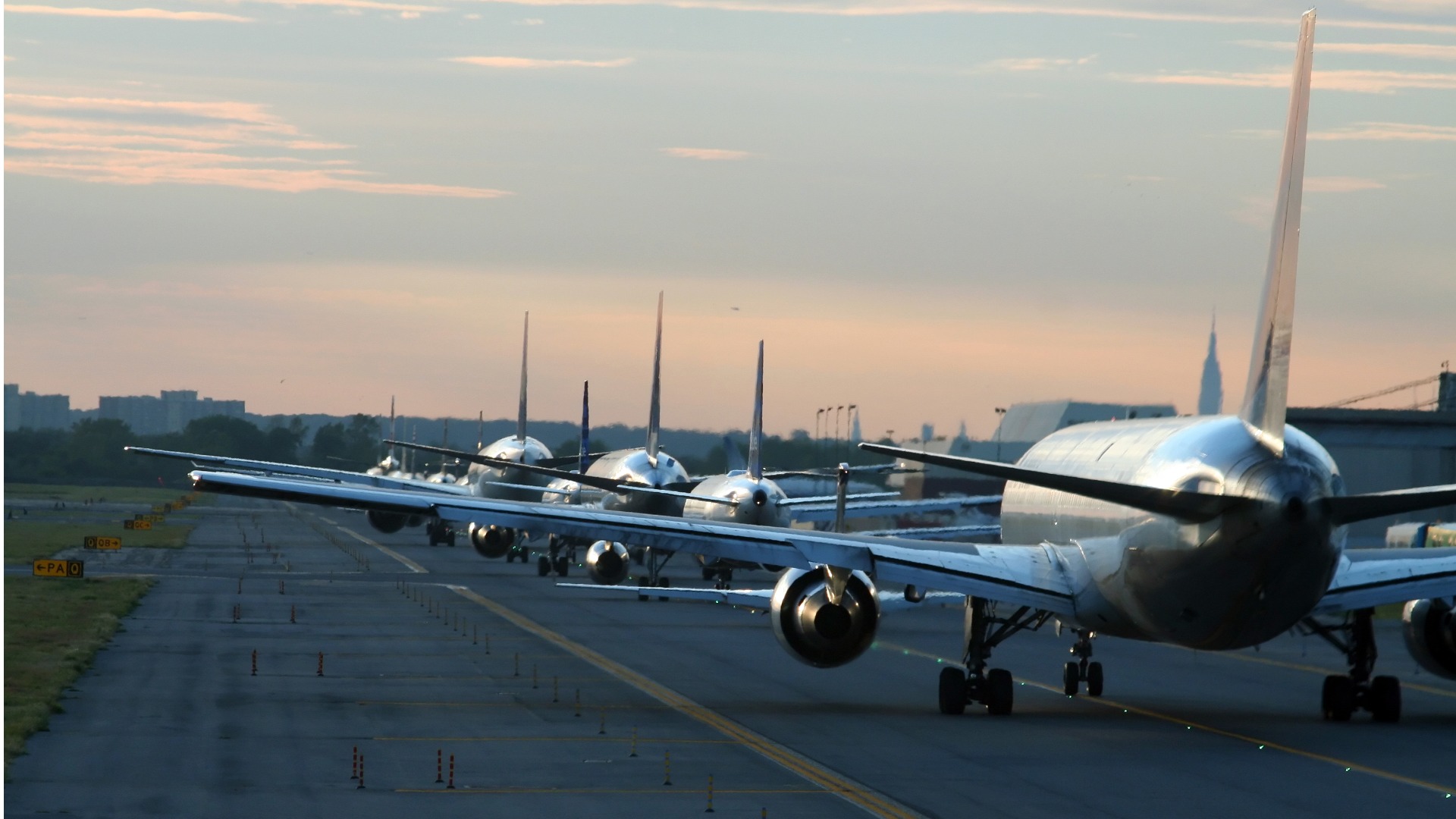 Fleet expansion slowed in 2020, at least in the short-term

Its toll on the global fleet was also severe. At the peak of the first wave of infections, roughly two-thirds of all mainline aircraft worldwide were grounded. IATA reported that the total aircraft fleet stood at 24,500 at year's end, much higher than the roughly 8,000 aircraft in service at the year's low point in April, but still an 18 percent drop from 2019.

The global fleet is not expected to return to its pre-COVID fleet numbers until the end of 2022 at the earliest, but long-term forecasts are still bullish. In its 2020 Market Outlook released in October, Boeing expected the global fleet to reach 48,400 by 2039, only a four percent downward adjustment from its 20-year forecast released before the pandemic. Airbus predicts a similar long-term expansion, calling for a total global fleet of 44,860 by 2038.

But some aircraft parked in 2020 are likely to remain out of service permanently. The international consultancy Oliver Wyman predicted that more than 2,600 planes will be retired by the end of May 2021, a roughly five-fold increase over the number of aircraft retirements in a typical year. These accelerated retirements are likely to cause ripple effects throughout the MRO and aftermarket sectors.

Not every challenge facing the industry is a new one. The conversion of analogue processes to digital ones and the need to better leverage data and new technologies like blockchain have long been hot topics among industry insiders. While these issues may have been put on the back burner during 2020, they haven’t gone away.

The market for data analysis, predictive analytics and digitalisation processes within the aviation industry has grown significantly in recent years and that trend is likely to continue for the foreseeable future. Boeing’s 10-year commercial market outlook forecasted a $3 trillion market opportunity through 2029 and highlighted digital solutions and analytics as critical parts of that growth, “as customers focus on leaner operations to adjust to future market demand.”

Recent years have seen an expansion of blockchain solutions and predictive maintenance. But the adoption of these and other technological advances has not been uniform, creating a hodgepodge of different industry practices. One is left wondering whether the necessary shift to survival mode pushed the widespread adoption of digital solutions back even further.

For an industry as advanced and high-tech as aviation, it can be somewhat surprising that it is often so conservative in its approach. Aviation is often seen as slow to embrace change, with many companies clinging to processes and technologies that are decades old.

This changed somewhat during 2020. The volatility brought on by border closures and cancellations forced airlines to adopt shorter, more flexible scheduling windows. Airlines traditionally built their schedules six to twelve months in advance, but flight scheduling windows were compressed to as little as six to eight weeks during the pandemic and this more dynamic approach to scheduling was identified in the Cirium report as one of the most important trends of the coming year.

There remains, however, a general perception that the aerospace industry is always a step or two behind technologies and innovations being used elsewhere, in part because many industry leaders would prefer to let others go first when it comes to trying out new solutions rather than taking the risks themselves.

Part of this is the natural result of aviation's focus on safety. Entrusted with millions of lives every year, airlines are understandably hesitant to introduce new technologies or procedures that haven't been thoroughly tested. But the industry's steady run of year-on-year growth has also likely played a part in this conservative mindset. Now that the industry has experienced such a tumultuous year, might that way of thinking now be over?

Our industry outlook from one year ago failed to predict an economy-crippling global pandemic. We weren't alone. Virtually no one foresaw what was in store for 2020 for the aviation industry and the world at large. Could another unsuspected event arise in 2021 that once again turns everything upside down? It’s not likely, but if 2020 taught us anything it’s that life can change in fast and unexpected ways.

Even the most connected insiders can’t accurately predict where the industry will go from here. Oliver Wyman warned that “reading the direction of the market correctly is trickier than ever” while Boeing cautioned that its market predictions entailed “more near term uncertainty than any forecast in recent memory,” including those released after 9/11 and the Great Recession.

Predicting how the industry will bounce back from this crisis is difficult and it’s doubly tricky to try to foresee unexpected crises on the horizon. But there are plenty of candidates, from the threat of cyber attacks to political instability. 2021 will start with Brexit, the impacts of which the industry has now been preparing for some time, and a new administration in the United States, which could impact regulations and green aviation technology.

But those are things the industry knows are coming. What unknowns might arise in 2021 that could complicate or improve the path of the pandemic or the industry recovery? Without a crystal ball, no one can say for sure.