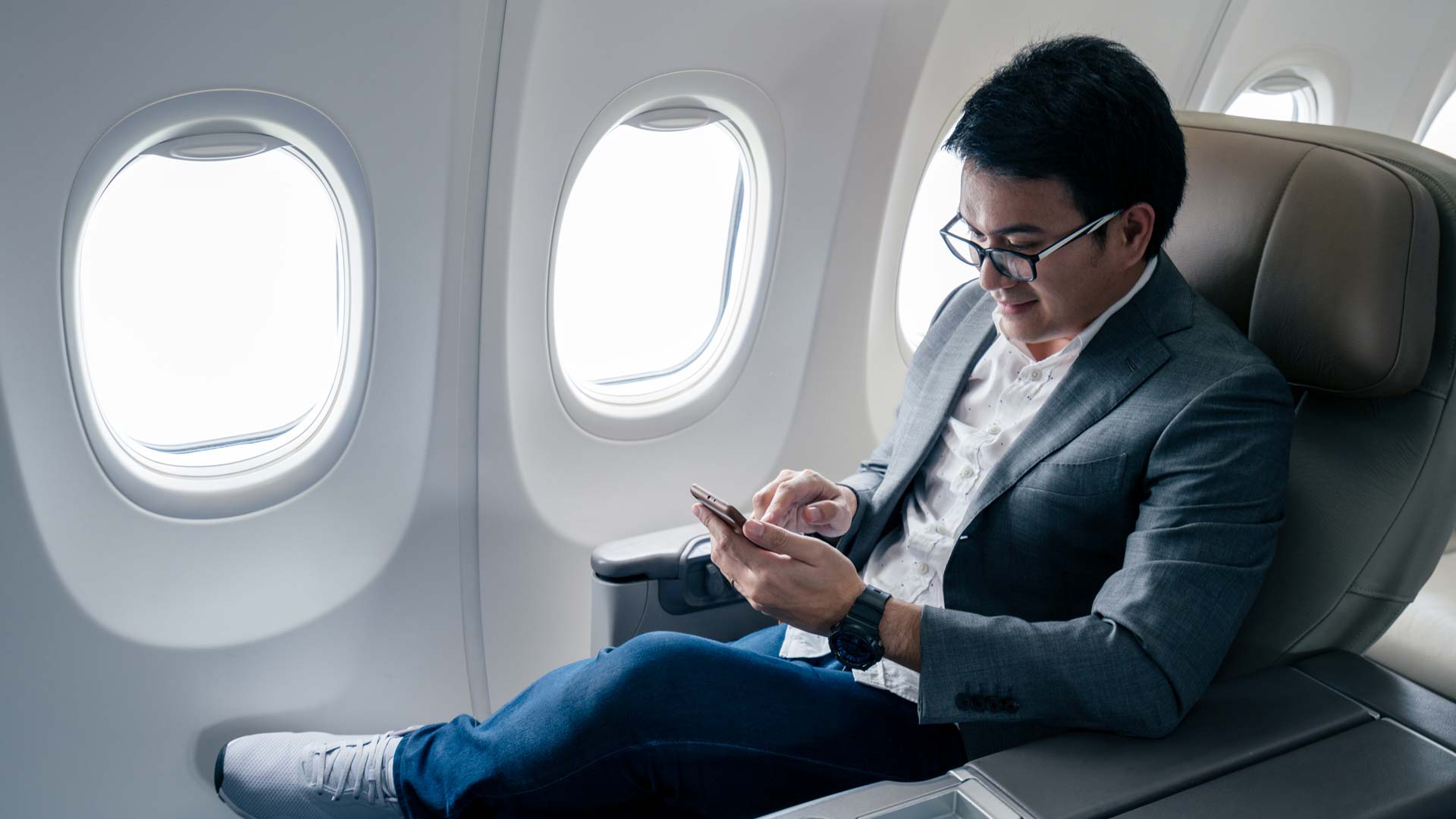 Over the last years, Wi-Fi has become an almost essential element of air travel. The opportunities for providing a truly connected customer experience, though, go beyond Wi-Fi. What should we be considering for the future of aircraft connectivity and what are the connectivity challenges ahead? We’ve got the answers below.

A recent survey conducted by British satellite telecommunications company, Inmarsat, in association with the market research company Populus, revealed that 78 of people surveyed find Wi-Fi to be fundamental to daily life. 55 described in-flight Wi-Fi as crucial.

It’s been suggested, though, that in order to meet the needs of an increasingly connected passenger, the future of aircraft connectivity in the aviation industry will have to go far beyond Wi-Fi, to promoting customer engagement at every touchpoint in their journey.

»There is an amazing transformation beginning to occur, « says Bruce Jackson, President and Managing Director of Air Informatics, an unbiased organisation trying to address the current and future challenges of connectivity, informatics, analytics, information, analysis and cybersecurity in aviation.

The reason it’s so amazing, Jackson explains, isn’t because any of the technologies we’re seeing are completely new. Far from it, some of the technologies being explored today dates back ten years, he explains. The biggest difference, though, is new applications for these technologies as well as shifting competitive landscapes.

Jackson shared his thoughts on the matter at MRO Europe 2018 and we were there for the discussion. Here are the key takeaways.

READ ALONG:
As we investigate five emerging technologies that promise to change the MRO industry.

What exactly is meant by aircraft connectivity?

Aircraft connectivity, or the connected aircraft, both software incisive and data-intensive, goes far beyond onboard Wi-Fi. It’s a means to something greater.

»What we’re really looking at is passenger engagement, and using connectivity to really engage the passenger as we go into the second generation of these types of systems. First, there was plain old in-flight internet access. This was something pioneered by Boeing and connected by Boeing. Moving into the second generation of systems, the goal is to take that further.« 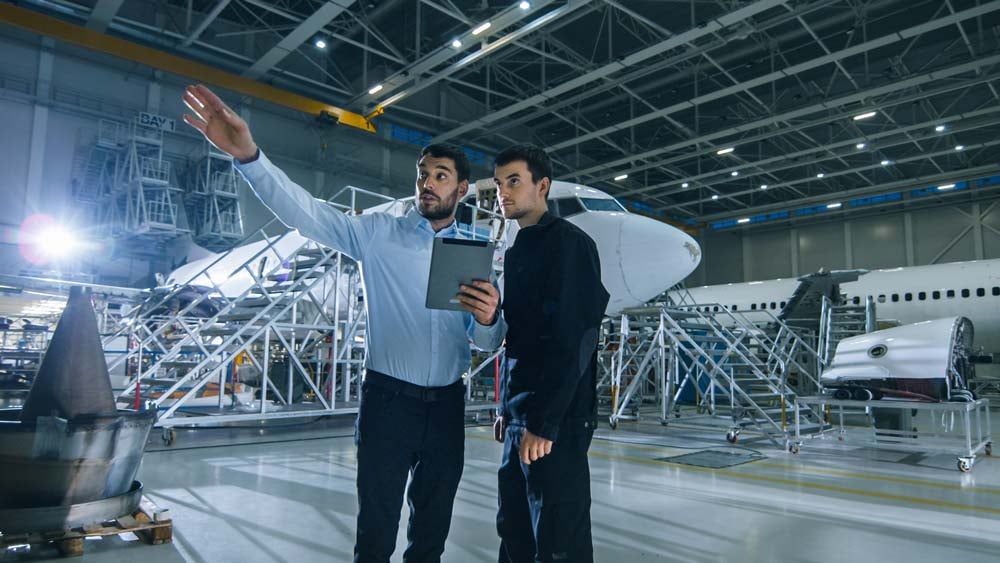 How do we achieve the connected aircraft?

Achieving aircraft connectivity comes down to understanding passengers and their needs. The passenger, Jackson holds, is really the leader in this space. Their demands and expectations are extremely high. So what can the industry do to meet the demand?

This involves thinking quite broadly about the customer’s experience and the buyer’s journey as a whole.

»It can come when they’re thinking about travel, when they’re booking a flight, when they’re planning their engagement – because you may even begin to look at your travel plans while you’re in-flight – and it doesn’t end until they get home, and have a chance to look back on that trip. So you have to look at all of these elements, « Jackson explains.

In other words, the customer experience starts at home, continues on the ride over to the airport, it takes place while boarding, during the flight and continues all the way until the passenger exits the plane. In order to design a connected experience at all of these touchpoints, you need good data points.

»We have to realise we’ve moved into the Internet of Things and the aeroplane is just another node on that. Every application you may want to use on that aeroplane is another data point, another data source, another sensor that you can integrate into the system, and you’re talking about an entire fleet that is a data collection point for you,« explains Jackson.

EXECUTIVE PERSPECTIVE:
How to foster technological innovation in organisations.

»You now have more data that you need to use, analyse and make sense of than you ever had before – on and off the aeroplane. You have to integrate the data and integrate your thinking, to come up with something different, and that is far more difficult than it sounds,« Jackson states.

Achieving this, Jackson believes, requires an organisation-wide cultural shift toward innovation and prioritising a holistic customer experience. To him, this means doing away with the silo-departmental mentality and being more open to failure.

“You’ve got to understand what you’ve done in the past, but you still have to keep an eye on the future. Learning from your failures is maybe the next best step,« says Jackson.

He suggests you look at the whole investment as if you were a venture capitalist – throwing a lot of money out there, knowing that not every idea will be a winner, but that one will be a massive home run.

»Don’t always expect the return to be today. It may be enabling the next big win, « says Jackson.

It’s a monumental time right now for the prospect of a fully-connected aircraft. With a shifting competitive landscape and no single player definitively on top, it’s anyone’s game. But how exactly is the competitive environment changing? For one, airlines are seeing a greater volume of service providers available than ever before.

»We’re in an interesting time because of the explosion of providers that are in that space. We went from one to what is now just a massive increase in the number of providers itself, « Jackson explains.

On top of this, says Jackson, a massive supply of bandwidth has caused prices to drop – in a sense, commoditizing connectivity. Already there’s been a 50 price drop in the last two years with an additional 50 drop expected over the course of the coming two years.

With bandwidth becoming a commodity, vendors may not have the luxury of lording prices over airlines. Jackson believes this will cause a change in the power dynamic between providers and airlines.

»What I think is interesting is the change and where the power lies. I think for the airline that gives a shift of power to them, where they can look more closely at their contracts and the services provided,« Jackson explains.

With airlines in a new power position, granting them greater abilities to scrutinise the terms of their contracts with providers, they will have to carefully consider how they’re protecting themselves in their contracts and ensuring high-quality deliverables.

Jackson compares the current landscape to that of the cell phone industry in the early 2000s, where companies quickly acquired mass accounts for their employees without any expectation of quality of service guarantees.

By 2005, such a service was simply demanded because of a power shift from provider to the customer. Similarly, Jackson notes, airlines will have to consider their current contractual terms as power shifts to them.

To make sure you get the best terms, Jackson suggests you consider the following questions:

To ensure providers are living up to established baselines and best determine how to set these baselines, you’ll need to conduct independent, annual performance audits. The Ookla Speedtest often employed to test the speed of bandwidth, is not enough. Jackson suggests performing a packet level test for every device on the aircraft. 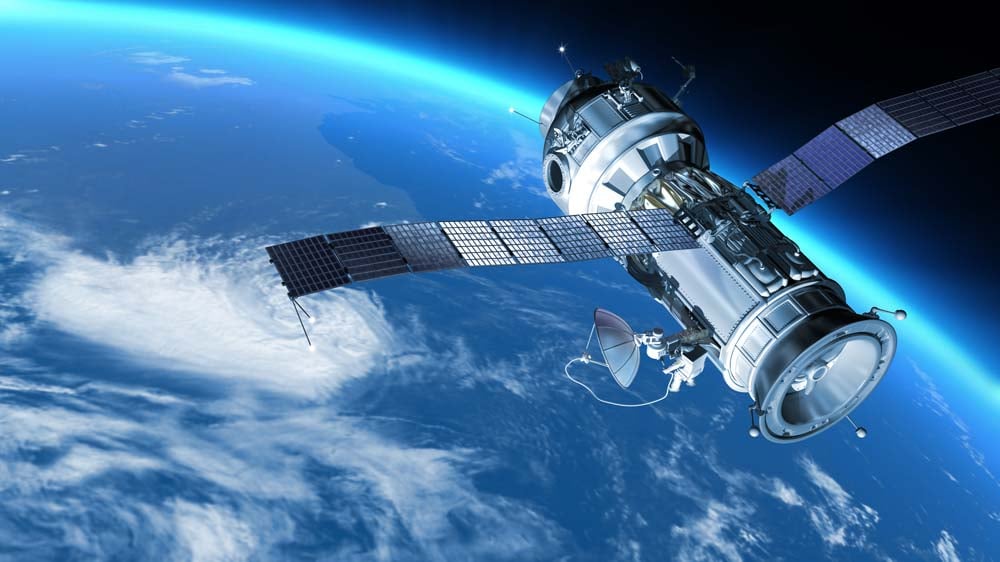 Moving toward better-connected aircraft, there are a number of challenges for the various parties involved.

One challenge for the providers of aircraft connectivity is that the industry has become highly competitive. There are lots of offerings on the market and of those, many were infused with venture funding that, in the past years, has been readily awarded.

As a result, many players are experiencing high debt loads – some with debt due within months – and major shifts in leadership. All in all, Jackson believes this will lead to business model changes, consolidations, restructuring, mergers, acquisitions and bankruptcies.

OEMs, experiencing a lack of qualified and experienced staff and still in a plain-old-internet mindset (POIS), are not potentially responsive to moving forward with a more connected aircraft.

Jackson expects that the next few years will remain similarly volatile.

»This is like the dot-com era with the same challenges. It’s smoothing out, but I believe the next few years is still going to be highly volatile,« says Jackson.

What does this mean for airlines? Airlines will need to push back on resistance and ensure they’re properly insulated from any instability the service providers may be experiencing.

Cybersecurity and your in-flight entertainment systems

Moving into fully functional aircraft connectivity, data will need to be top-of-mind. This means that a strong cybersecurity defence will be a crucial challenge for anyone getting involved with aircraft connectivity. Aviation software is dependent on open source code and vulnerabilities exist that are not yet discovered. Further, many of the systems employed haven’t been updated since their initial design.

It’s important that to ensure cyber security both in terms of privacy and compliance with General Data Protection Regulation (GPDR), but also in terms of protecting your valuable asset.

As Jackson notes, data is a currency and should be protected as a valuable resource. In order to do this, you should ensure that an assessment of your cyber security is carried out by someone independent of your in-flight entertainment (IFE) provider.

What will the future hold for aircraft connectivity?

As the industry moves forward towards ultimate connectivity, one thing is certain: others will be moving forward as well.

»As we look at this broadly, there are so many areas of application and so many opportunities. Every airline is now moving this forward to try and find a way to engage with the passenger. Some are just beginning; some are a bit further along, « says Jackson.

So how do you come out on top? According to Jackson, you’ll have to think out of the box and fail forward.