The Covid-19 pandemic has changed the landscape for aircraft parts, forcing both buyers and sellers to rethink their traditional approach to the market.

Prior to the pandemic, buyers tended to purchase enough aircraft parts to build an inventory buffer that would be there when needed. Likewise, operators and maintenance shops often didn’t bother to offload parts until they had a large enough surplus that could be sold off in bulk, often at bargain prices.

But the industry-wide downturn brought on by Covid-19 has made both sides rethink their strategies. Buyers of parts, typically airlines, chose to reduce a lot of their inventory because of their cash flow challenges. On the other side of the equation, sellers, which are typically OEMs and dedicated parts and services providers, now view their supply chains as potential moneymakers that can help offset some of their losses.

“Since the pandemic, the entire supply chain has become a lot more responsive,” says Allan Uldahl Riis, the Director of Commercial Strategic Programmes at Satair. “A lot of the buffers have been removed across the entire chain because no one is really holding stock anymore, or at least not like they used to.”

Airlines, rather than going to their own warehouses or affiliated repair shops for the parts they need, have instead turned to digital marketplaces to find and buy parts ad hoc.

"Buyers gain access to an extended range of products and a one-stop shop that offers a seamless end-to-end experience within a curated ecosystem of vetted sellers," he explains. "Sellers get access to a larger customer base, enhanced visibility and additional revenue from a new distribution channel." 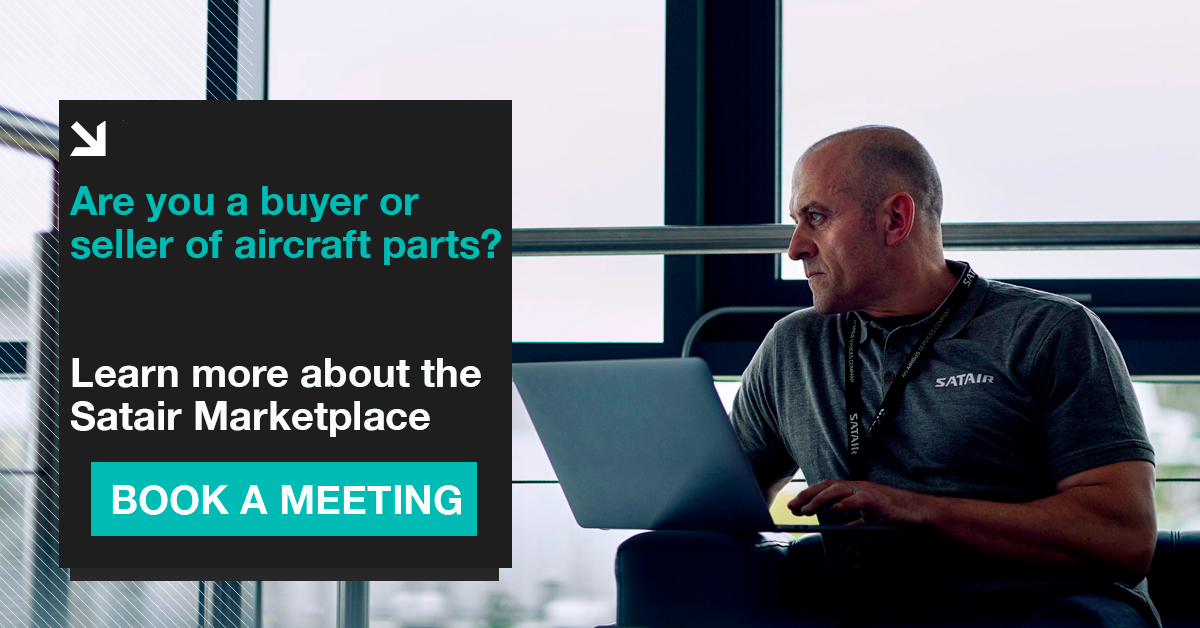 Mirakl's industry-leading software powers the Satair Marketplace, where Satair's own extensive inventory of parts are sold alongside those of approved third-party sellers. This wide variety of available parts provides buyers with numerous options, including the condition of the parts they need. According to Riis, buyer behaviour on that front has changed significantly as a result of the industry crisis.

“Previously, airlines might have only used factory-new parts but now they are more willing to buy a surplus part or even a used part,” he says. “They’ve also really opened up their supplier base. Whereas before they may have only bought from one or two preferred suppliers, they’re now open up to the idea of using multiple suppliers.”

With both buyers and sellers feeling a financial pinch, it’s also now become more common to negotiate over the price of spare parts. That’s where a digital marketplace can help both sides get a more accurate sense of the fair market value of aviation parts. Buyers are able to do comparison shopping while sellers are able to gauge the market-wide availability of certain parts and set their prices accordingly.

Another change is that both buyers and sellers have adopted a more short-term approach. On the buyer side, airlines have gone from purchasing enough parts to cover their perceived needs for a year or more in advance to now only buying what they know they will need in the next month or so. Sellers, meanwhile, are now less likely to wait until they’ve amassed a large surplus of parts that they can offload in bulk. Instead, they’ve realized that they can get much higher margins by selling the parts individually.

Many buyers have accepted paying a slightly higher per-item price rather than buying in bulk. But according to Riis, that’s a trade-off many are willing to make.

“Ordering on-demand might result in paying a little bit more, but it’s not likely to be a dramatic difference,” he says. “More importantly for the buyers, they’re reducing the risk of ending up with obsolete parts.”

While many of the behavioural changes can be directly linked to the financial impact of the pandemic, some of the market dynamics can also be explained by the aviation industry slowly but surely becoming more comfortable with the types of digital solutions that have long existed in other sectors.

"The aviation industry has very specific standards and certifications, as well as precise and detailed regulations regarding maintenance activities," Joséphine explains. "Aviation spare parts are also more complex than those in other industries. This may have slowed the process to implement the marketplace model, but it has been progressing significantly over the last years."

Riis adds that airlines and other aviation companies have historically wanted to maintain complete control of their own value chains but are now starting to realize that it may actually be beneficial to give up some control.

"You don’t necessarily need to have control of everything," he says. "And when it comes to buying and selling parts, there are platforms for that.”

Digital marketplaces have helped to soften the blow of the job losses both buyers and sellers suffered during the pandemic. Under the traditional model, an interested buyer would send an email to a seller’s order desk, which would then search for the part in an internal system and then turn around a quote if it was available.

Marketplace systems can be easily integrated into buyers’ and sellers’ own systems, greatly reducing time-consuming manual processes. When a marketplace provider also screens both buyers and sellers, risks are also reduced on both ends.

“Sellers have come to realize that it’s actually quite easy to sell parts directly through these types of platforms, while buyers are able to cast a wider net in order to get a favourable price on the parts they need and still be sure that it will be delivered as promised and come with all of the appropriate paperwork,” Riis says.