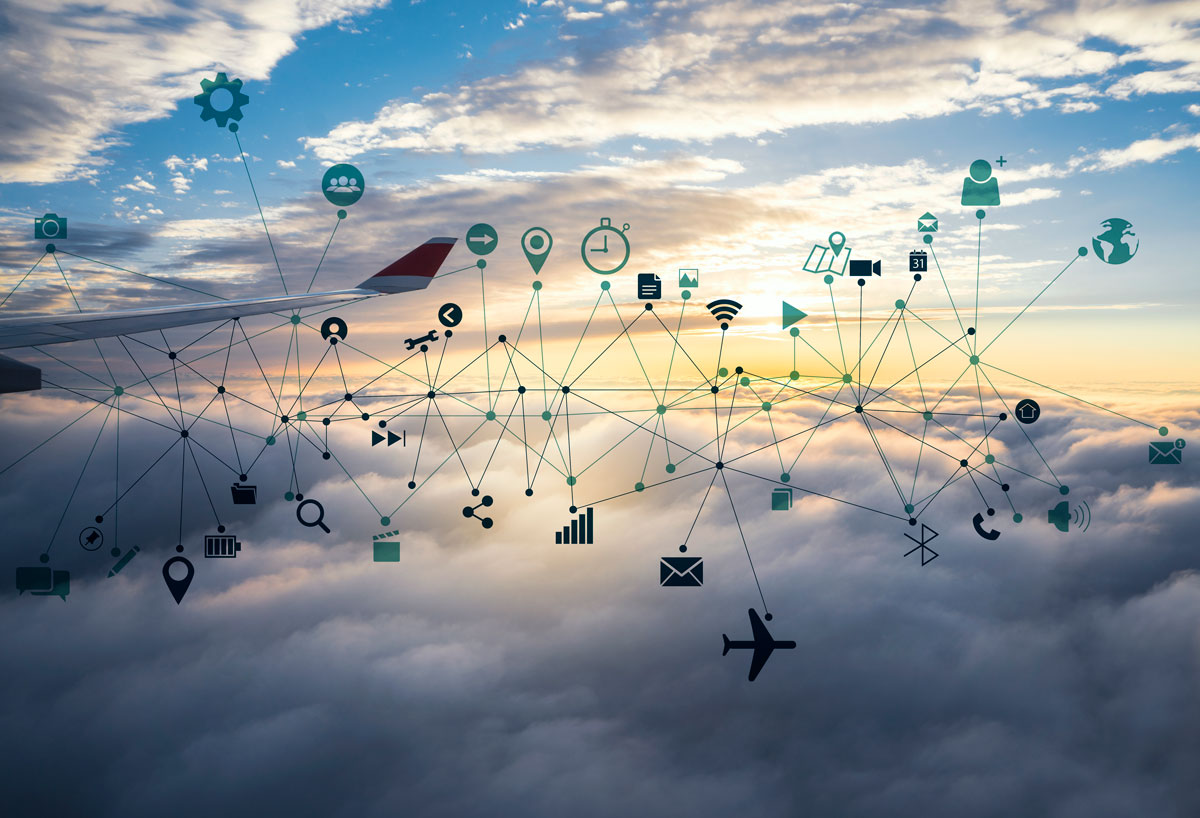 By combining the power of global satellite communication and the networking strength of IoT technology, the connected aircraft promises to bring about significant operational enhancements across the board. Just how much can inflight connectivity affect the bottom line and how do the benefits manifest themselves? Find out in this article.

It’s an exciting time to be part of the aviation industry. IATA and leading aircraft manufacturers alike are pointing to an exceptional increase in passenger traffic and aircraft demand during the next 20 years.

At the same time, airlines and MROs are finding themselves in a time of rapid change, as they fight to leave the old ways behind and embark on a digital journey; one which is thought to bring about nothing shy of an industrial revolution.

However, tremendous growth also presents new challenges: as competition rise to new levels, so does passenger expectations, constraining margins in the process. More aircraft in the skies will, too, result in additional fuel burn and more CO2 emissions, increasing the environmental impact of the industry.

Little by little, it’s becoming clear that without a reassessment of the current technology, infrastructure, and business models, the industry will struggle to accommodate the immense growth predicted in the coming decades.

According to a study from Inmarsat, a leading company in the global mobile satellite communications, the connected aircraft holds the potential to address some of these issues.

The study, the first to comprehensively model the economic impact of inflight connectivity on the aviation industry, argues that the rise of the connected aircraft could unleash the power of IoT technology, providing a series of efficiencies and operational benefits across the entire eco-system.

These benefits combined could yield savings for the global airline industry of up to up to US$7.5bn annually based on existing connected aircraft numbers – a number estimated to rise to almost US$15bn by 2035 or approximately 2 percent of the total cost of airline operations today.

In addition to these cost savings, the first instalment of the study concluded that the connected aircraft offer a wealth of revenue opportunities, which could result in $30bn in additional revenue for airlines by 2035.

Main benefits of the connected aircraft

Inmarsat’s study highlights a diverse range of benefits that could arise as a result of airlines’ investment in connected operations. These include:

Let’s take a closer look at these benefits.

Aircraft fuel is one of the heaviest budget headings for any airline. Fuel accounts for up to 20 percent of airlines’ total operating costs and a third of the global airline industry's total expenses. With that in mind, it’s clear that any mean to lower fuel consumption will have a profound impact on the profitability of airlines.

Although engine OEMs work continuously to enhance the fuel efficiency of aircraft engines, the improvements in engine technology have little effect if aircraft often end up flying longer, inefficient routes.

According to Inmarsat, optimised flight planning and other efficiencies made possible by inflight connectivity is estimated to yield 2-3 percent fuel savings per flight – that’s 3.3bn to 10.1bn litres saved annually globally, at a value of US$1.3bn-US$3.9bn.

Optimising pre-planned routes is just one of the cost-saving benefits of the connected aircraft.

Satellite-enabled connectivity will enable real-time streaming of severe weather and wind updates on the fly, allowing pilots to steer away from potential areas of clear air turbulence and severe weather – avoiding delays and saving up to 3.39bn litres of fuel per year.

There’s a clear correlation between the weight of the aircraft and fuel burn. Due to communication issues, Inmarsat notes, around 1 out of 10 aircraft depart without the latest wind and temperature data for the pre-planned route. As a result, the aircraft must carry more contingency fuel, adding unnecessary weight.

A connected aircraft could avoid this through its ability to upload and receive data at any time. Other dynamic, real-time adjustments include automated catering solutions that can accurately forecast passenger numbers and adjust catering requirements accordingly – thus reducing the weight of the aircraft.

The study from Inmarsat concludes that inventory management efficiencies like these could reduce costs by up to 7 percent per flight.

The entire industry must work together to reach IATA’s ambitious target of a 50 percent reduction in net aviation CO2 emission by 2050. Inflight-connectivity can’t solve the environmental challenge alone, but it can certainly make a difference.

Naturally, the efficiencies in fuel-burn made possible by increased connectivity will have an equally positive effect on the CO2 emissions from aircraft.

Combined, the study from Inmarsat concludes, the annual benefits of operational connectivity could be around 2.5 percent to 5 percent of the total current fuel consumption – equating to at least 21.3m fewer tonnes of CO2 by 2035. 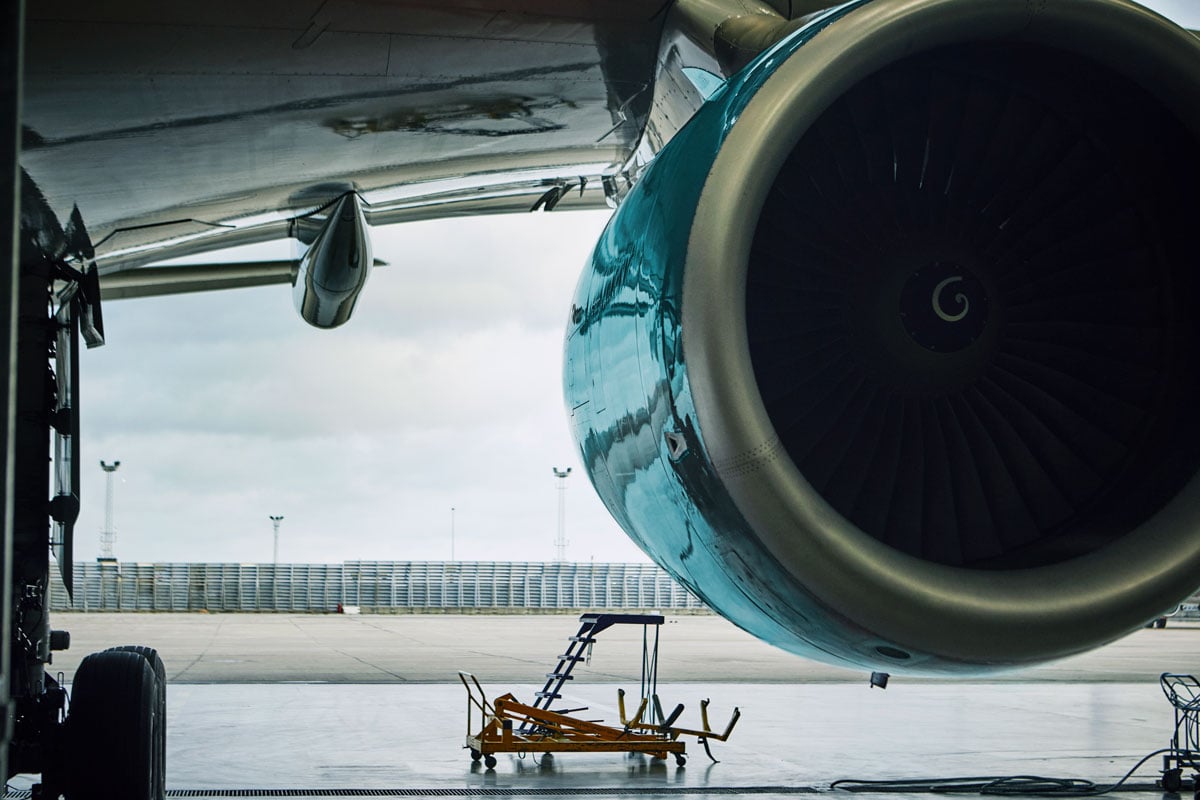 Around half of all flight delays are caused by unscheduled maintenance events and, as we all know, these delays can be very costly for airlines.

The rise of predictive maintenance tools along with inflight connectivity allows unprecedented amounts of data to be transmitted from onboard servers to the cloud or ground, enabling real-time monitoring of the aircraft’s components.

A considerable portion of what is now classified as “unscheduled” maintenance events could be predicted, and the number of delays could be significantly reduced, saving airlines billions of dollars a year.

Most airline executives probably had a nightmare or two about AOGs in their life – and for good reasons. An aircraft, that is suddenly taking out of action, costs airlines between US$10,000 to US$150,000 per hour of downtime and up to US$1.2m per day.

At a global level, AOGs are estimated to cost the industry upwards of a whopping US$62bn annually. These numbers in mind, it’s clear why avoiding AOGs are a top priority for airlines, parts distributors and alike.

The connected aircraft allows airlines to use data to make better decisions that can reduce the risk of AOGs and minimise potential downtime. For example, data from an e-enabled aircraft could indicate that a critical part is going to fail two weeks in advance, giving airlines a heads-up to plan the repair.

Real-time weather updates could, too, make it easier for pilots to avoid lightning strikes that can cause severe damage to aircraft, immobilizing them for longer periods of time.

As the industry prepares for more aircraft to populate the skies, we must also turn our attention towards the infrastructure and the technology required to make this shift as efficient as possible.

The study argues that the industry must migrate from the current radar-based systems to satellite-based navigation, to make it possible for aircraft to fly closer to each other and thus ensure more efficient routes.

CLICK HERE:
To explore UAM and the rise of urban air taxis.

This would enable autonomous position reporting and provide digital communications that, in turn, will yield enormous benefits for the industry as a whole. Inmarsat concludes that the consolidated benefits of migrating to satellite-based navigation could be worth upwards of US$160bn by 2035.

2017 was the safest year in history with no commercial passenger jet fatalities, according to The Aviation Safety Network. Even though travelling in the skies is one of the safest means of transport in the world, the connected aircraft promises to set even higher safety standards.

How? For starters, the connected aircraft of the future will be able to send flight data to a virtual black box in the cloud, replacing the physical counterpart that can be tedious or even impossible to recover. This would make vital information immediately accessible in the event of an accident.

The connected aircraft’s ability to optimise flight paths could also directly prevent severe onboard injuries by avoiding areas of turbulence; a phenomenon that causes around 200 passenger injuries per year, according to Inmarsat. 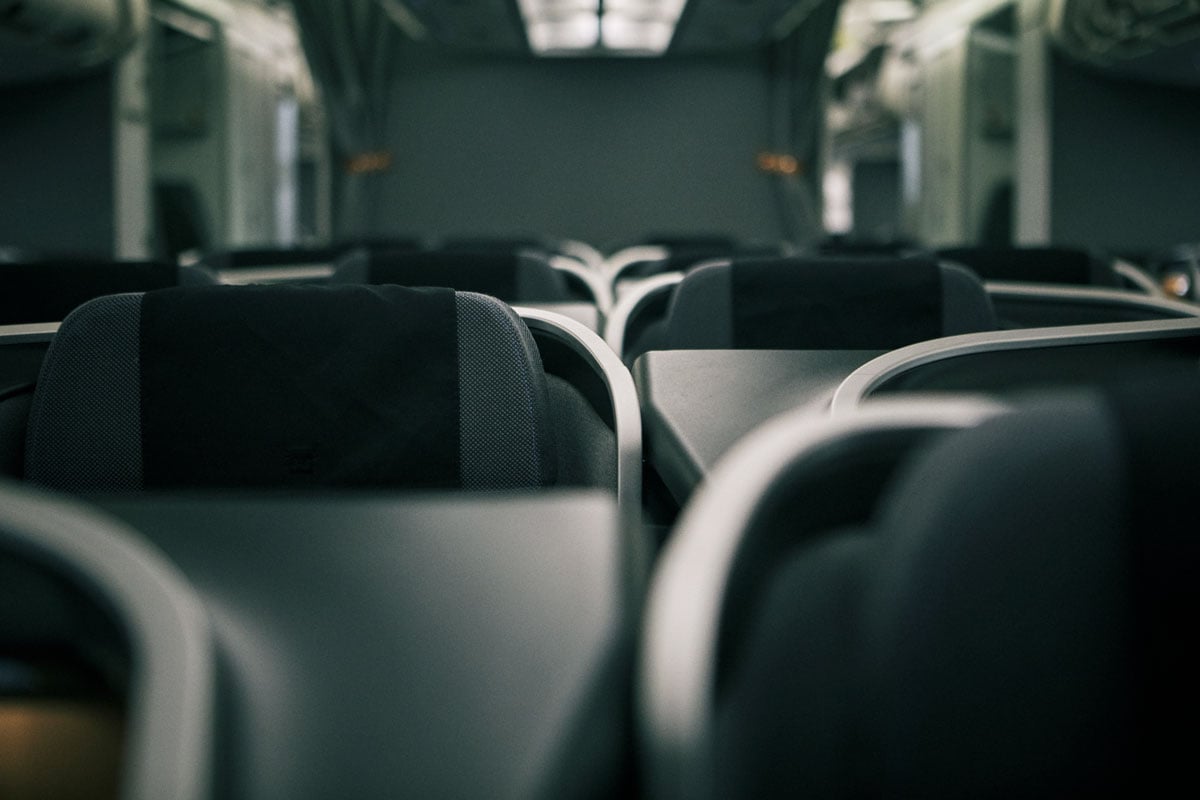 Airlines and aircraft manufacturers alike are well aware that the benefits of the connected aircraft are far too great to ignore.

Evidence of this is very clear when looking at the latest aircraft from Boeing and Airbus, who are equipping their aircraft with an ever-increasing amount of data collection points to facilitate the digital shift ahead.

To truly unleash the power of connectivity, though, it will take more than compatible aircraft. It will require a transformation of the entire eco-system; from global satellite communications to new operations applications and the digitalisation of key areas such as air traffic management.

It’s clear that a great challenge lies ahead. But if we look around us, the connected aircraft is slowly taking form.

FIND OUT:
Making IoT a reality in the aviation industry – what does it take?