The aviation industry’s controversial CORSIA scheme began in earnest six months ago. To mark the occasion, the Satair Knowledge Hub spoke to a prominent supporter and critic of the scheme. In this article, we interview Michael Gill of IATA.

Michael Gill is the Director of Aviation Environment at the International Air Transport Association (IATA), the trade association for the world’s airlines that represents over 80% of all air traffic. IATA was instrumental in convincing the International Civil Aviation Organization to set 2019 as the CORSIA baseline rather than the originally-planned average of 2019 and 2020 emissions.

While IATA supports CORSIA, the organisation is adamant that carbon offsetting should not replace other efforts to reduce the aviation sector’s emissions. We spoke to Gill about the industry’s green targets, progress to date and some of the criticisms that have been levelled against CORSIA. For the counterpoint of his argument, be sure to read our interview with Stay Grounded spokesperson Magdalena Heuwieser. 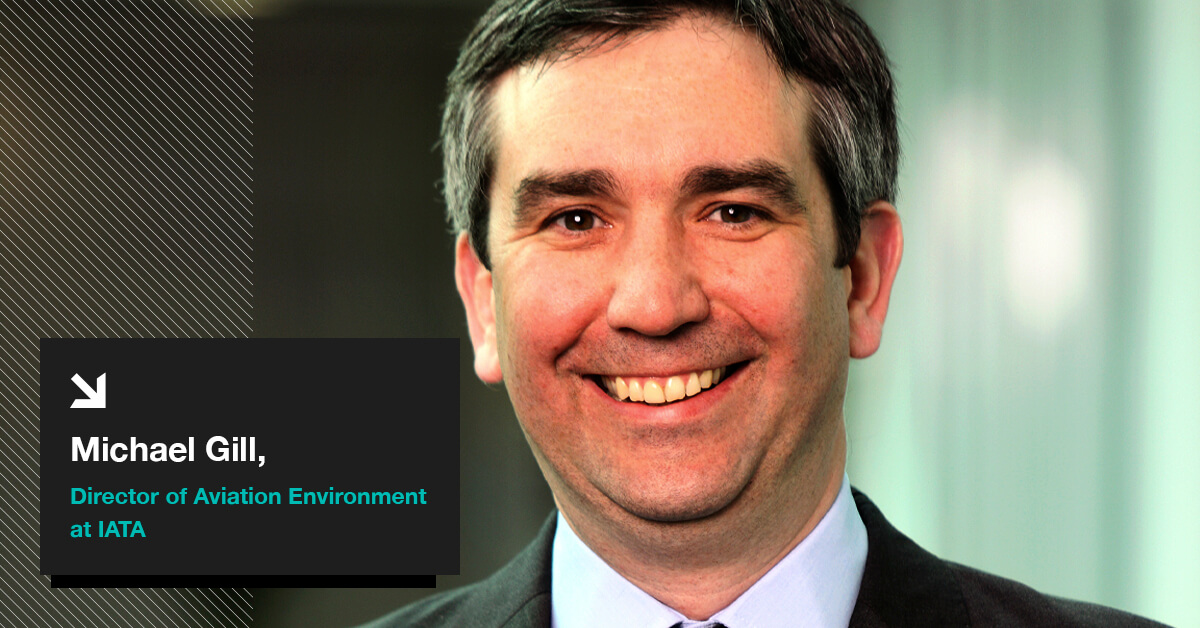 Satair Knowledge Hub: As of 1 July 2021, 92 states representing over 77 percent of international aviation activity have agreed to participate voluntarily in the first phases of the CORSIA programme. Now that we’ve entered the start of the voluntary stage, is IATA satisfied with that or do you wish there was bigger buy-in?

Michael Gill: We are satisfied with the buy-in to date and in particular we are delighted to see that countries have volunteered who would technically be excluded from CORSIA but opted to be part anyway. This shows the importance and commitments by many of the ICAO states.

SKH: How does CORSIA fit in with IATA’s four-pillar strategy for significantly cutting emissions? Is this a significant step toward greener aviation or is this more of a stop-gap measure until better technology (sustainable aviation fuel, hydrogen-powered aircraft, etc) kicks in on a larger scale?

MG: It’s closer to the latter. Offsetting under CORSIA is fundamental to achieving carbon-neutral growth in aviation emissions from 2020. Carbon emissions have been capped at 2019 levels (915 million tonnes) under the CORSIA baseline calculation. It may take some time to get back to those levels but once COVID is behind us, CORSIA will be key in maintaining carbon-neutral growth.  industry set three major goals: improve fuel efficiency by 1.5% every year between 2010-2020; carbon-neutral growth from 2020; and cutting C02 emissions by 50% relative to 2005 levels by 2050. CORSIA is the mechanism for achieving the second target and one of four “pillars” to reach our climate targets. However, we envisage that as technology steps up – Sustainable Aviation Fuel, hydrogen, electric-powered flight – offsets will play a diminishing role. The lifespan of CORSIA itself is 2021-2035.

In 2009, the industry set three major goals: improve fuel efficiency by 1.5% every year between 2010-2020; carbon-neutral growth from 2020; and cutting CO2 emissions by 50% relative to 2005 levels by 2050. CORSIA is the mechanism for achieving the second target and one of four “pillars” to reach our climate targets. However, we envisage that as technology steps up – Sustainable Aviation Fuel, hydrogen, electric-powered flight – offsets will play a diminishing role. The lifespan of CORSIA itself is 2021-2035.

SKH: In terms of both short-term impact and long-term effectiveness, how do carbon offsets compare to some of the other ways aviation could cut emissions? For example, IATA has estimated that SAF could account for 2 percent of aviation fuel by 2025 and then expand quickly from there. Would it be better to focus on initiatives like this instead of carbon offsets, or does aviation need to pursue an all-of-the-above approach?

MG: We need to pursue an all-of-the-above strategy. The industry is focusing hard on new technology but inevitably there will be a significant lead time to get production levels to where they need to be. We also need supportive government policies to help underpin the new technology in much the same way that governments supported wind, solar and battery power during the nascent stages of their development. Carbon offsets are available in volume now and are critical to achieving our 2009 target of carbon-neutral growth by 2020.

SKH: Following the worst year in aviation history, many airlines are understandably focused on survival. Is there a chance that the industry’s green ambitions will be a victim of the crisis? Or did COVID actually help speed up the transition by, for example, accelerating the retirement of older, less-efficient aircraft?

MG: Certainly the retirement of older aircraft ahead of schedule has helped emissions, but despite the crisis, we remain committed to our targets (outlined above). In fact, many airlines have announced much more aggressive individual targets than the ones set out by the broader industry. More than 40 airlines carrying more than 40% of international passengers have pledged net zero emissions by 2050 or earlier, and tellingly the majority made their announcement during the pandemic. We think that COVID has actually increased pressure on airlines to restart their operation in the most sustainable and environmentally friendly way.

In addition to passenger expectations, big investors are focusing more and more on ESG [environmental, social and governance, ed.] ratings and sustainability initiatives that airlines have or will be implemented before making an investment decision.

SKH: Some of the major criticisms of CORSIA are that it is voluntary until 2027 and that it doesn’t cover domestic flights, which account for a third of aviation emissions. What’s your response – are these criticisms fair? Is there something the critics are overlooking?

MG: As far as the scheme is concerned, it’s voluntary in the sense that states must declare their participation, but the scheme applies to its full extent and rigour to flights between states that have volunteered. Regarding the time frame, ideally it would be applied on a mandatory level before 2027 but this is a scheme that has been agreed upon by 193 sovereign countries. A high level of engagement makes the scheme more effective, but it does mean some countries need more time to prepare.

Many global domestic routes are already covered by separate emissions schemes, such as the EU ETS and more airlines are introducing voluntary offset programmes on domestic flights. But there has to be a framework that covers flights between sovereign states and that is what CORSIA is designed to do. As you point out, more than 70% of emissions are generated by medium- to long-haul flights and the majority of these flights are international and covered by CORSIA.

SKH: Even some airlines are critical of CORSIA. Would it be better for airlines to pursue their own individual strategies, which could spur competition, or is a global framework the only way to achieve and monitor results?

MG: We believe a global patchwork of schemes would create competitive distortions and could possibly lead to more emissions. For example, passengers might fly further to take advantage of cheaper fares in a country where the emissions policy is less stringent. We believe CORSIA is the most effective short to medium term solution for emissions until new low-emissions technology is scaled up.

SKH: A Deutsche Welle analysis found that participation in CORSIA will cost airlines less than 1% of their operating costs by 2035. Does that level of investment show that airlines are taking their environmental commitments seriously?

MG: CORSIA was not intended to ensure a minimum level of financial commitment from airlines. It’s intended to stabilize emissions at 2020 levels. And this allows the investment in actual emissions reductions. Airlines have invested about $1 trillion dollars since 2009 on more fuel-efficient planes constructed with new generation materials (composites) and more efficient engine technology to reduce CO2 emissions. Carbon offsetting is only one pillar and airlines will focus more on SAF and other technology to achieve decarbonization as it is scaled up. Offsetting is necessary to account for the remainder of emissions.

SKH: International aviation is the only sector that has an absolute cap on global CO2 emissions and today’s flights emit only roughly half as much CO2 as they did 30 years ago. Do you think that the aviation industry gets the credit it deserves for its advancements to date and its future green initiatives?

MG: It is not widely known that aviation was the first global industry to declare a climate target back in 2009 (increase fuel efficiency by 1.5% a year between 2010-2020; carbon-neutral growth from 2020; and cutting emissions 50% relative to 2005 levels by 2050) and emissions per passenger have fallen 54% since 1990 as aircraft and engines become more fuel-efficient.

Aviation accounts for about 2% of all global emissions but most surveys show that the public thinks the figure is much higher. But just because it is 2% doesn’t mean we are not focused on sustainability. Safety remains paramount, but sustainability is the metric on which we will be judged for decades to come. Innovation runs deep in the industry and technology such as SAF and hydrogen and electric powered flight is now a reality. We need to convince the public that we can reach our emissions targets – but it is a fact that we will need government support to scale up new technology like SAF. If we receive the same sort of support that governments gave other renewable industries like solar, wind power and electric vehicles in their development stages, we will be very well placed to achieve our targets.

SKH: If we could ask you to look into a crystal ball, do you think the industry will hit its 50% emissions reduction target by 2050? If that target is reached, what sort of role will CORSIA have played in that?

MG: Yes, we firmly believe that we will hit the target but this is still a huge challenge for the industry. Aviation is a hard-to-abate sector: there is no replacement for liquid fuel for long haul flights which account for about 75% of aviation’s CO2 emissions.

The Waypoint 2050 research paper published by the cross-industry Air Transport Action Group has identified three clear pathways to reach our 2050 emissions targets. While SAF is the key technology to get us there (because it can be used in long haul flights), the ATAG research shows carbon offsets will play an important role in the short-term but taper off as other technology is introduced and scaled up (SAF, hydrogen and electric powered flight). As we move into the 2030s, the offsets are likely to be scaled back but will be available to cover any shortfalls from technology-based solutions.