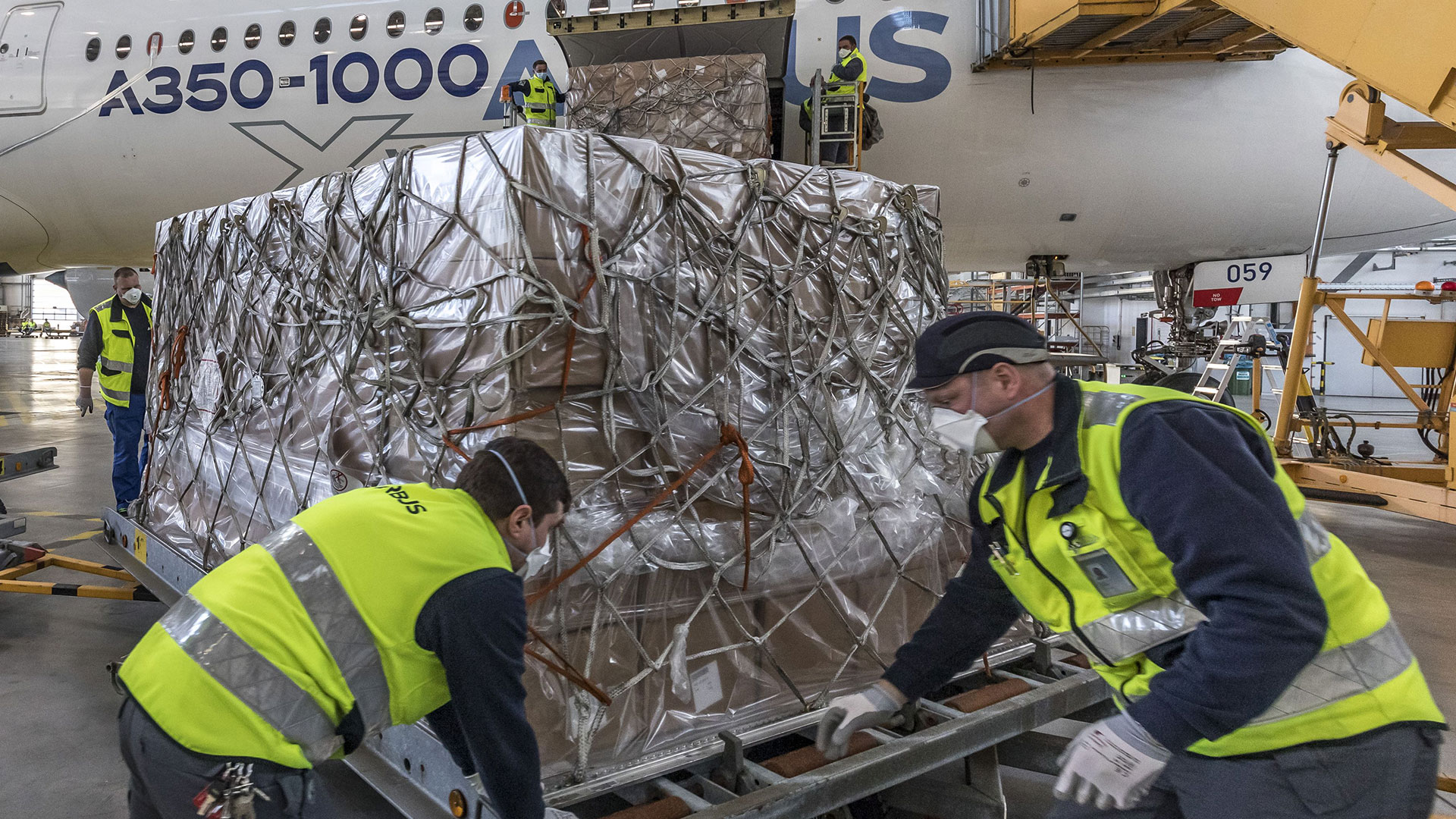 Boosted by a boom in online shopping, the demand for air cargo has returned to pre-pandemic levels. Record-high freight rates have many commercial airlines turning to cargo to help soften the blow of their lost passenger revenue.

Air cargo has emerged as an important source of revenue for airlines during the prolonged COVID-19 crisis. The historic decline in passenger traffic that led to the worst financial year in aviation history comes with an additional blow for commercial carriers, which normally carry around half of the world’s air cargo in their belly space. With fewer routes operating because of the pandemic, belly space freight capacity has plummeted.

Boeing’s World Air Cargo Forecast found that nearly a quarter of all air cargo capacity was lost in 2020. But yields were up over 40 percent and overall air cargo industry revenues increased by 16 percent thanks to freight rates that reached all-time highs, according to a Bernstein Research report cited by Bloomberg.

Airfreight volumes have increased steadily since bottoming out during the pandemic’s first wave. Air cargo demand, meanwhile, has surpassed even pre-pandemic figures. According to the most recent Air Cargo Market Analysis from International Air Transport Association (IATA), cargo tonne kilometres flown (CTKs) in February improved by nine percent and reached levels not seen since 2018.

“Air cargo demand is not just recovering from the COVID-19 crisis, it is growing. With demand at nine percent above pre-crisis levels, one of the main challenges for air cargo is finding sufficient capacity. This makes cargo yields a bright spot in an otherwise bleak industry situation,” Willie Walsh, IATA’s Director General, said in a press release.

In the pre-pandemic environment, freighters were already generating 90 percent of air cargo industry revenues. Freighters serve key trade routes that most passenger aircraft do not and operate on schedules that better fit the timing needs of shippers. Freighters can also carry full pallets that single-aisle passenger aircraft cannot and can transport dangerous goods not allowed on passenger planes.

The decrease in bellyhold cargo transport seen during the pandemic could be the start of a lasting industry shift in which freighters play an even bigger role in air cargo supply chains.

Commercial carriers turn to the ‘preighter’

While dedicated freighter carriers have benefited from the reduced bellyhold capacity on commercial flights, passenger carriers have tried to make up for some of their financial losses by using their parked aircraft to transport cargo. By the end of September 2020, some 200 airlines had operated around 2,500 passenger aeroplanes for cargo operations. The practice became so widespread that the term “preighter” is now a standard part of the aviation lexicon.

RELATED ARTICLE:
What should you consider if you're temporarily converting your aircraft from passenger to cargo?

Global aviation data firm Cirium found that between March and December 2020, 155 aircraft had all or most of their passenger seats removed in order to transport more cargo in their cabins.

“Removing seats to make way for piles of boxes is a very unusual concept but, of course, 2020 has been rather unusual. We’ve not seen airlines do anything exactly like this before,” Cirium’s senior aviation data research analyst James Mellon said. 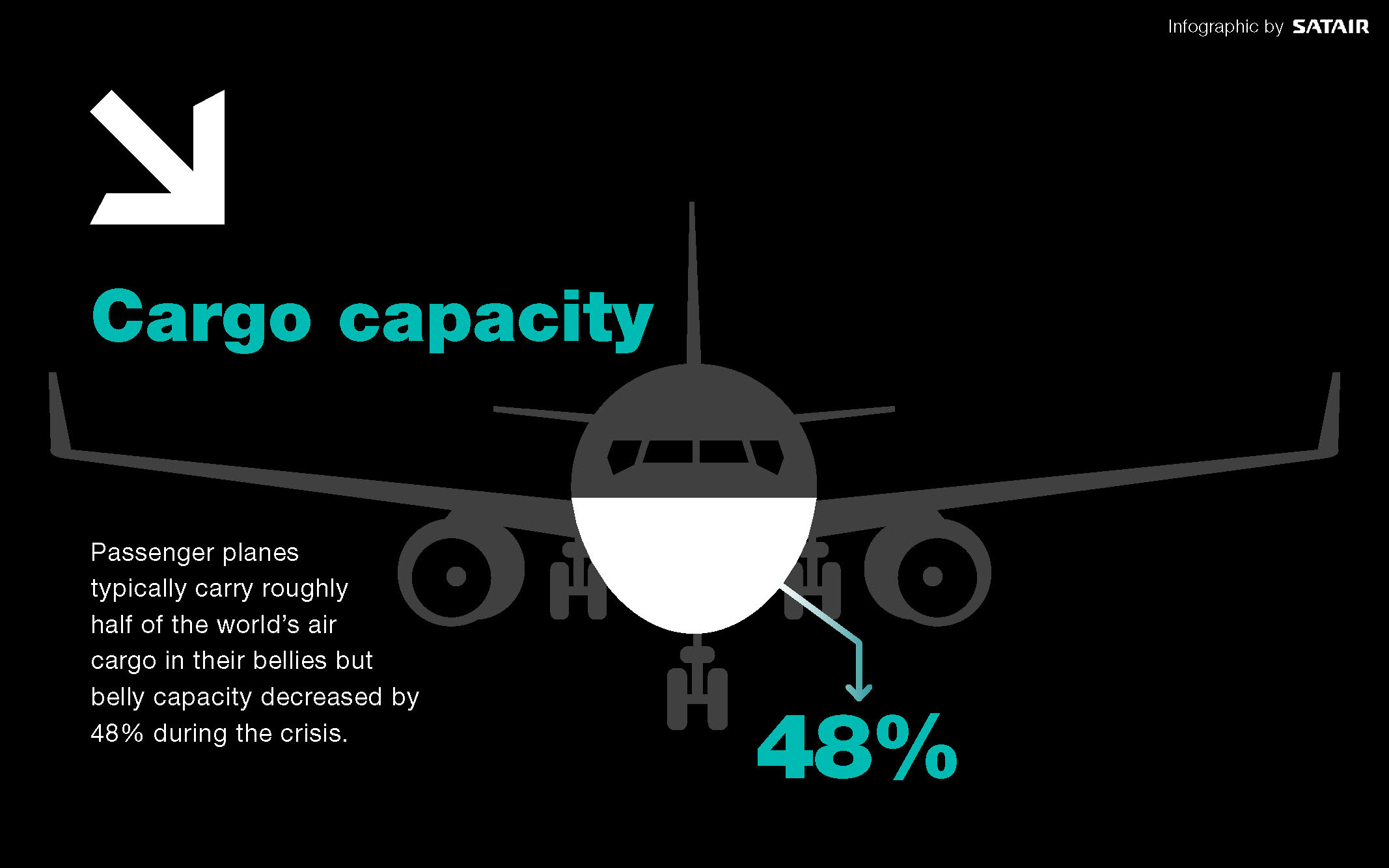 Air cargo carriers have benefitted from homebound consumers turning to online shopping like never before. Adobe’s Digital Economy Index found that consumers spent $844 billion online between March 2020 and February 2021 and that 2020’s e-commerce totals were 42 percent higher than the previous year.

Even with the end of the COVID-19 crisis now in sight, it’s widely believed that consumers’ growing preference for e-commerce will outlive the pandemic. Adobe predicts that online spending will reach as high as $930 billion in 2021 and top the trillion-dollar mark next year.

The other trend driving up air cargo rates and yields was the world’s desperate need for medical equipment and COVID-19 vaccines. During the first wave of the pandemic in spring 2020, thousands of so-called “ghost flights” carried medical supplies like face masks, gowns and other personal protective equipment (PPE) in their empty cabins and overhead bins.

With air cargo the quickest mode of transportation, the aviation industry plays an indispensable role in vaccine distribution. Delivering the roughly 10 billion doses that the world will need over the next two years will require 15,000 flights, according to a study from DHL and McKinsey.

Like so many of the industry’s COVID-related challenges, it’s difficult to predict how this will play out in the long term since so much will depend on the course of the pandemic and the speed of global vaccination programmes. Airlines also have to consider the economics of their cargo operations and a shifting competition landscape, two issues we explore deeper in this month’s related articles.

In an ideal world, commercial carriers would almost certainly prefer a return to business as usual on the passenger side, but with global infection rates still high as of April 2021, air cargo will likely continue to be a vital source of revenue for the foreseeable future.

The steep decline in passenger traffic and the corresponding loss of belly cargo space on commercial flights have provided a financial boost to dedicated freight operators and helped offset losses for commercial carriers that also have cargo divisions. Freight rates are at record highs and with e-commerce booming and air transport playing a key role in vaccine distribution, yields and revenues are up significantly.

This may signal the start of a shift within air cargo. While passenger belly cargo typically accounts for around half of the world air cargo capacity, freighters are expected to take the lion’s share over the next 20 years as world air cargo traffic is forecast to grow by four percent annually.