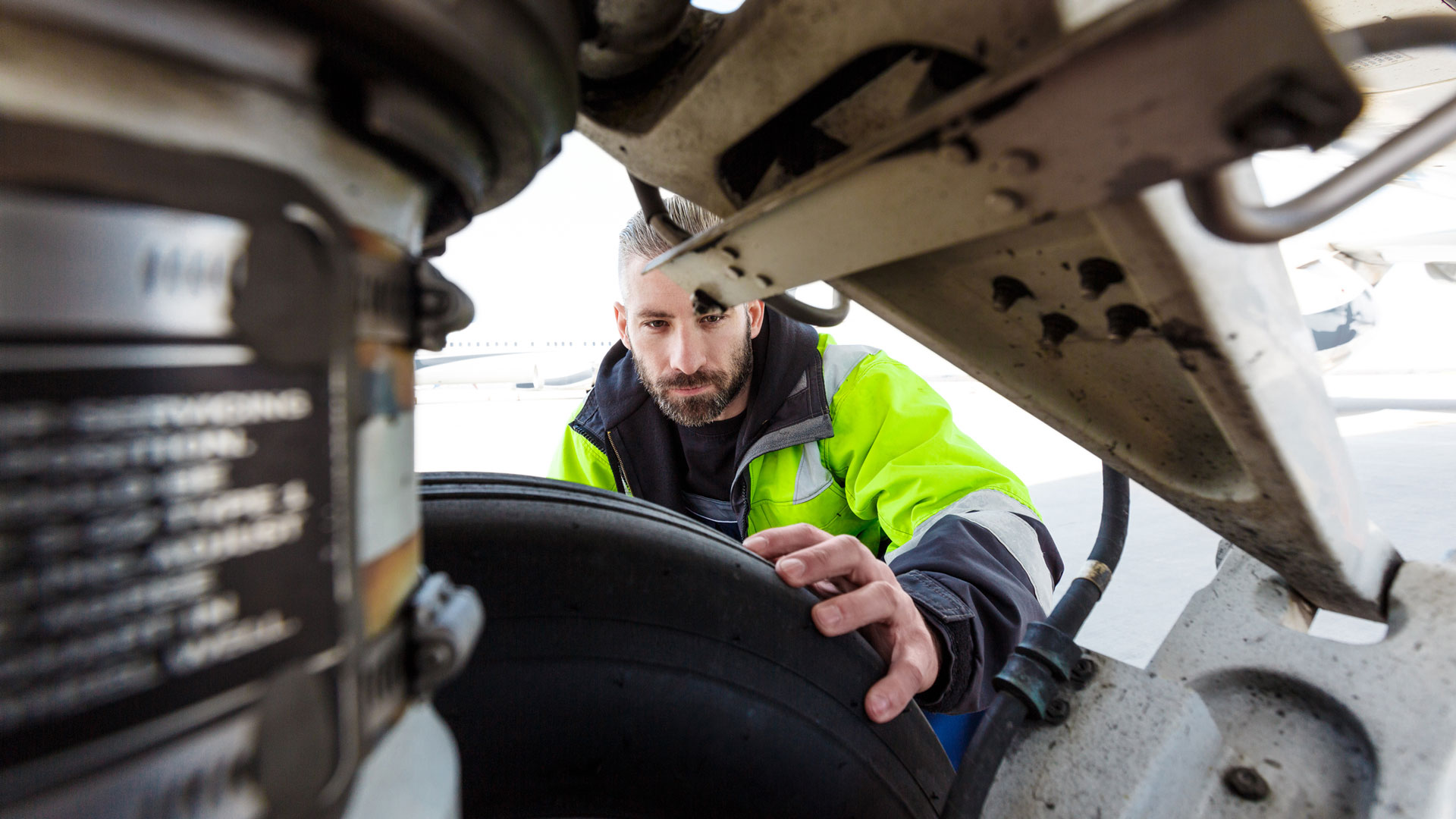 After 2021’s record-breaking year for global mergers and acquisitions, many analysts expect 2022 to provide more of the same, also in aviation.

The pandemic-ravaged year of 2021 may have slowed life down in many areas, but global mergers and acquisitions (M&A) were off to the races.

According to PwC, M&A activity in 2021 smashed previous records for both the number of deals and their cumulative value. The 62,000-plus announced deals were 24 percent more than in 2020 while the $5.1 trillion total value of the publicly-disclosed deals was an all-time high, besting the previous record by nearly one trillion dollars. 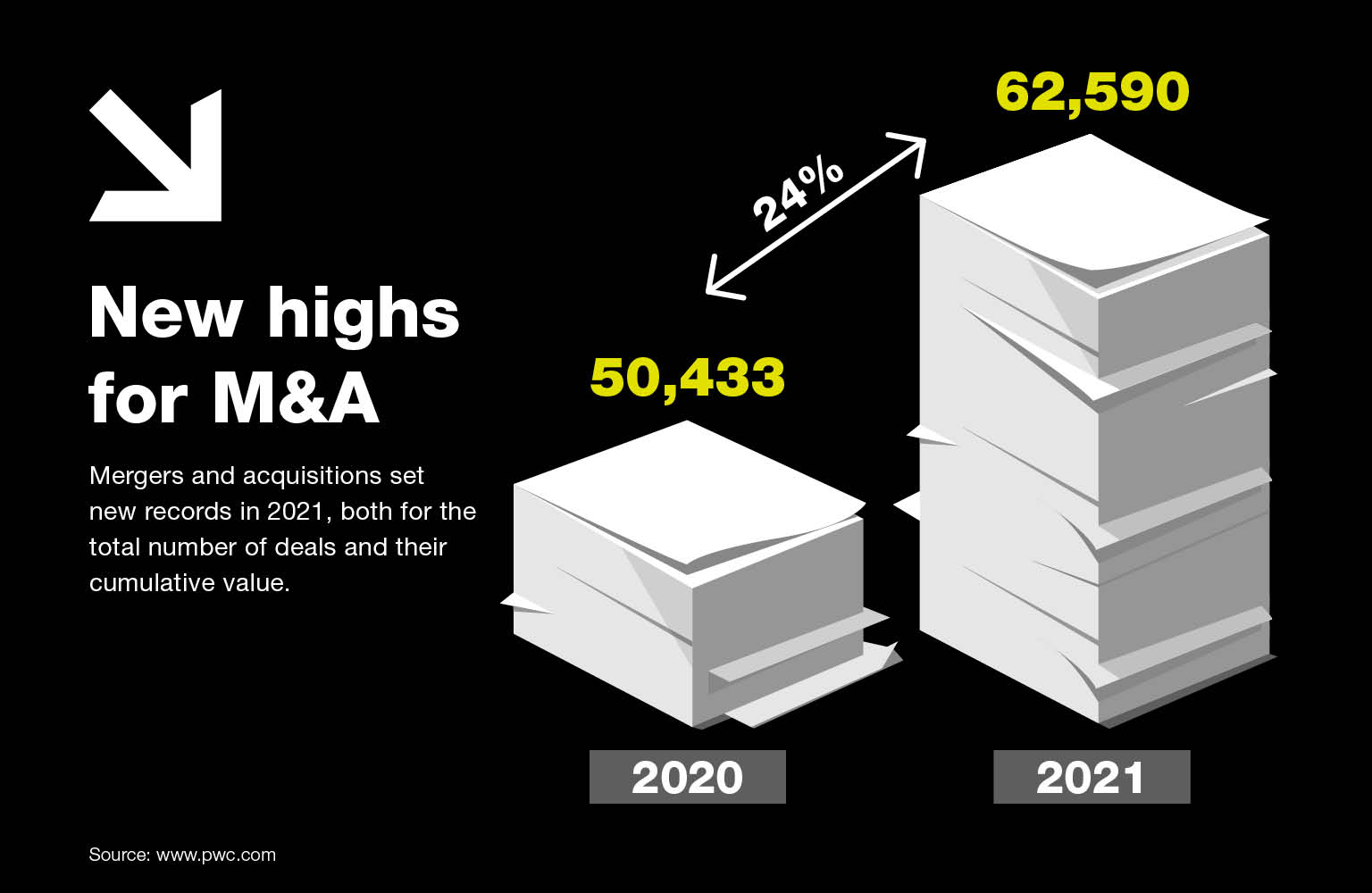 PwC sees another “supercharged” year ahead for global M&A and expects the aviation industry to get in on the action.

“Strong M&A activity in 2022 in the commercial aerospace sector appears likely, given that some manufacturers are raising production forecasts and that there exists a potential for supply-chain consolidation,” the firm wrote in its 2022 aerospace and defense deals outlook. 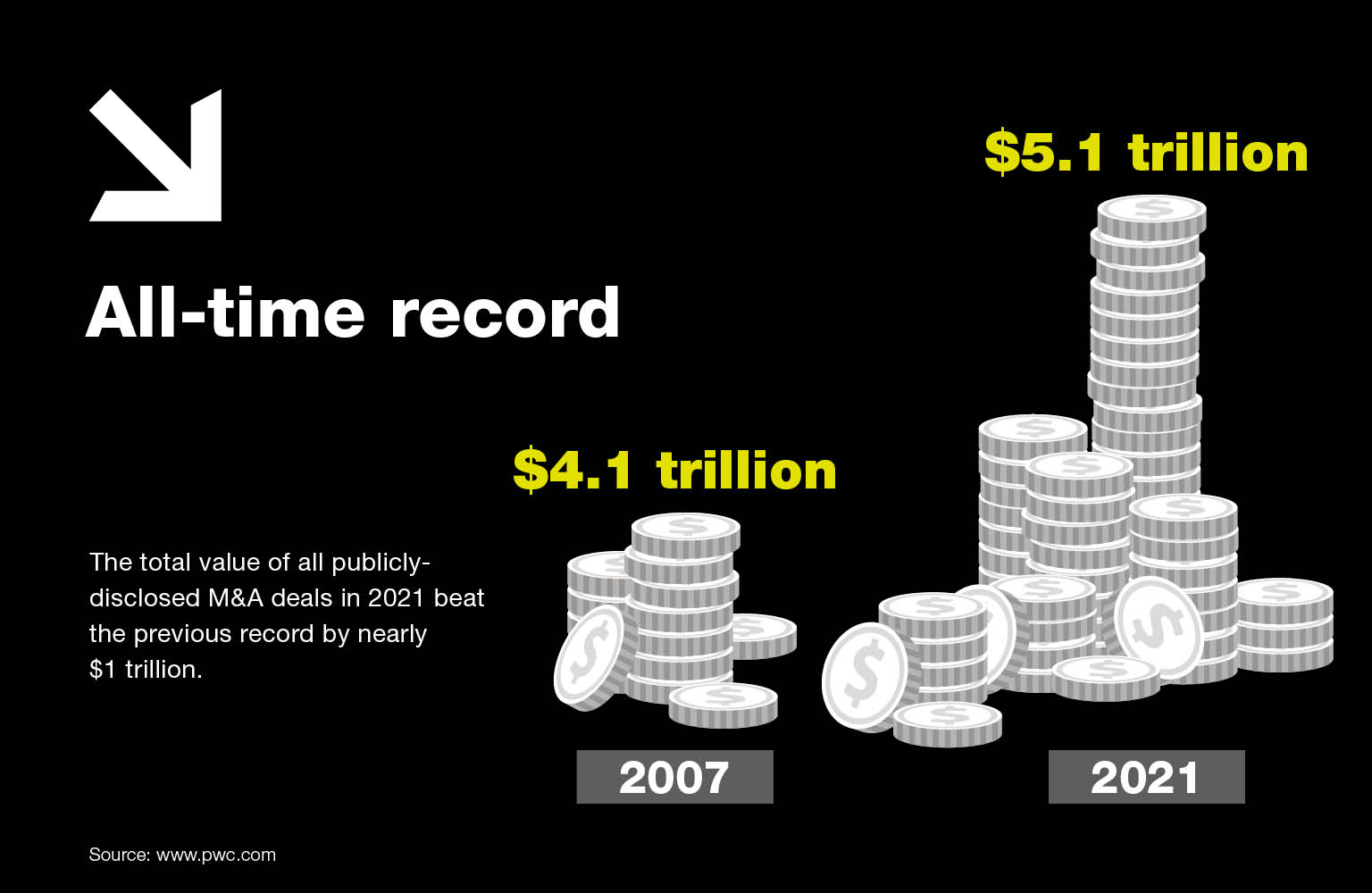 A harbinger of things to come?

The first weeks of 2022 seemed to bolster these predictions, with US low-cost carrier Frontier buying and merging with rival Spirit. The $6.6 billion deal, announced on February 7, catapults the combined company to the fifth-largest carrier in the United States.

The industry is abuzz with rumours of other potential airline mergers. This is particularly true in Europe, where EasyJet has already rejected a takeover attempt by Wizz Air, Lufthansa has shown interest in ITA and IAG is still trying to “find a way” to merge with Air Europa after cancelling its takeover bid in the face of regulatory scrutiny.

On the leasing side, the world’s largest lessor AerCap completed its purchase of its biggest rival GE Capital Aviation Services in November, while Carlyle Aviation Partners bought out Fly Leasing three months prior. 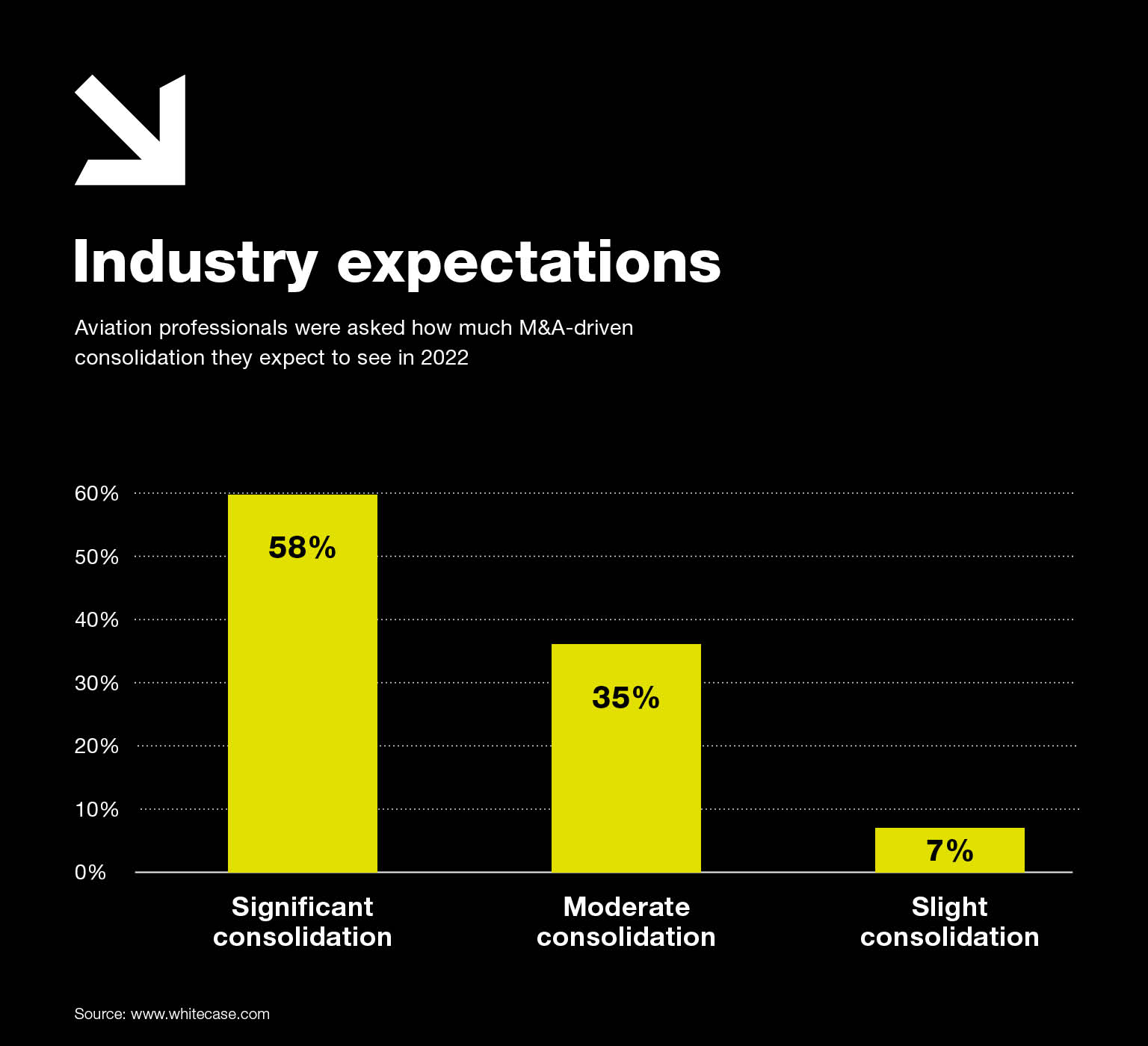 What about the MRO sector?

But what about the aviation aftermarket? Prior to the pandemic, a big concern within the MRO sector was Airbus and Boeing’s growing penetration into the aftermarket. But when industry experts gathered to discuss possible consolidation in the MRO sector at the MRO Europe conference in October 2021, Neranjana de Silva, an aerospace expert at Roland Berger, said that the industry slowdown has likely put the ambitions of OEMs to snatch up MRO companies on hold.

“They [the OEMs, ed.] obviously have other priorities right now. But I think this will come back again,” de Silva said. “MRO is a sort of a territory that, whether rightfully or wrongfully, they see as a profitable area, especially with things like spare parts. So they will want to get a piece of this.”

For now, de Silva said that the more likely scenario is that private equity firms turn their attention to the MRO sector.

“We shouldn't underestimate the private equity role here because this is the type of thing they would do. They would come into a downturn and try to get a good deal and move on to recovery, and that's how they will sell off,” de Silva said.

Her fellow panellist at MRO Europe, head of Credit Suisse’s European Transport team Neil Glynn, said that smaller MRO firms that have difficulties rising to current industry challenges are the most likely to be lost to consolidation.

“Scale is often the key driver of M&A decisions. Smaller players that are finding it difficult or expensive to find labour [or] invest in digitisation will be far more willing to talk to a potential buyer,” he said. “Whenever there are technological changes required, whether it's decarbonisation or digitisation, that has been a force for consolidation because not every player within a given market will be capable of doing it of their own.”

Daniel Luecke, head of M&A at Lufthansa Technik and another participant in the MRO Europe panel discussion, agreed. He said that state support programmes have protected airline-owned MROs during the pandemic but left smaller players in a much more difficult situation.

“I expect more consolidation in 2022 in the medium and lower range of the market but probably not that much amongst the larger players,” he said.

Another important factor that will determine the MRO consolidation landscape is how long the cheap interest rates that fuelled M&A in 2021 will last.

“Investment committees [will be] focussed on answering the question: How long does cheap financing remain available? What kind of returns can we make while that situation does persist?” Glynn said.

“With the cheap cost of financing available, there should be a huge amount of interest but I think there's clearly going to be a difficulty in matching seller and buyer requirements at the moment,” he added. “That's that's normal in any kind of early stage of recovery.”

As the PwC and White & Case reports indicate, there is certainly an expectation that the remainder of 2022 will see its fair share of mergers and acquisitions. Whether this comes to pass will depend on the industry’s post-pandemic recovery. If private equity firms continue to show interest in MRO companies and OEMs pivot back to their pre-pandemic plans to take a bigger chunk of the market, the sector could see significant consolidation. But private equity and the OEMs will first need to feel confident that the recovery is going to stick.