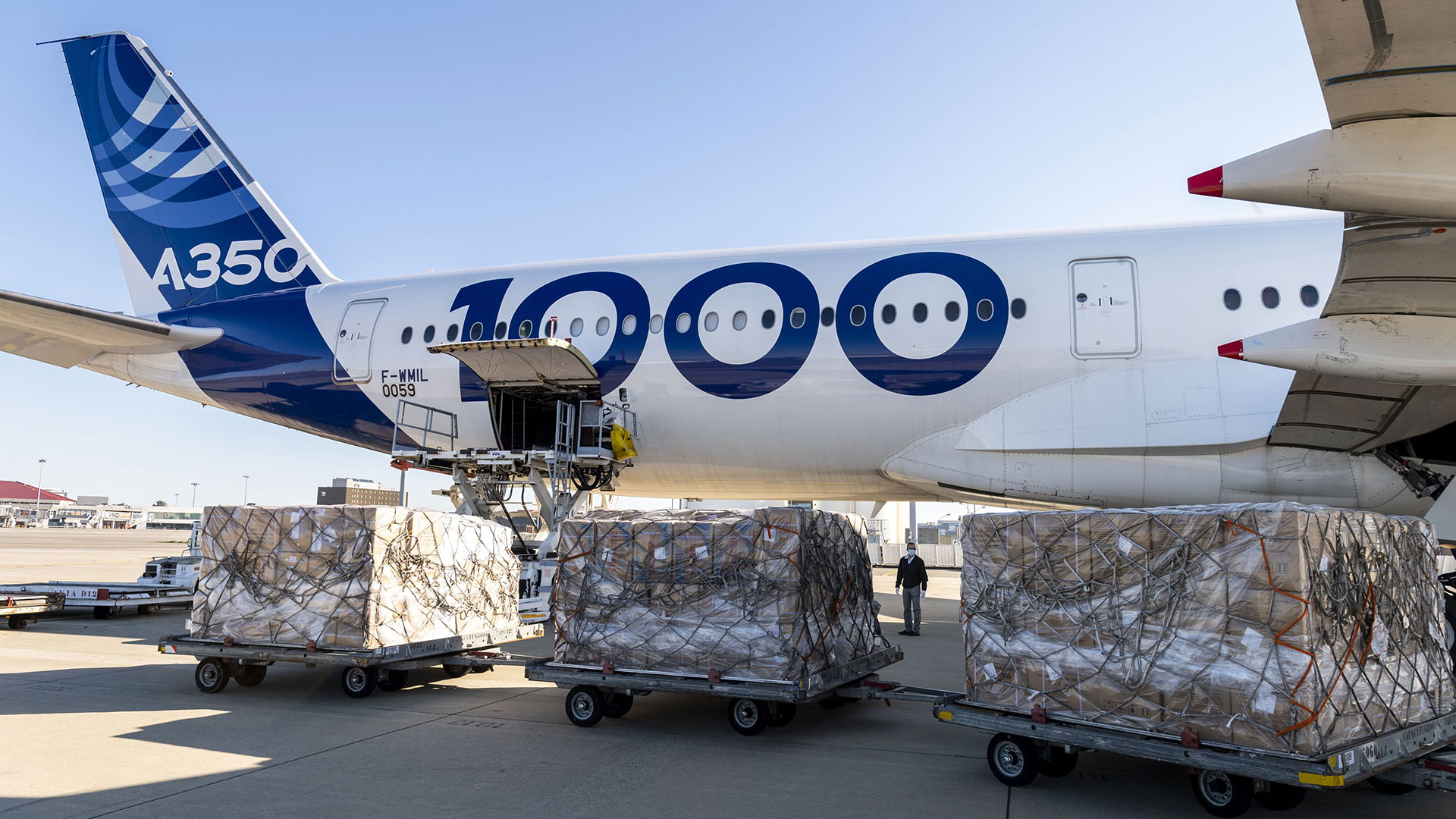 Boeing has long been the market leader when it comes to cargo aircraft, but some industry analysts think that changes to the air cargo market and a rumoured new model from Airbus could shake up the picture.

Boeing and Airbus have a virtual lock on the global aircraft manufacturing market. The duopoly accounts for 99 percent of large aircraft orders worldwide and the two companies have engaged in a rivalry that has been marked by both bitter disputes and occasional cooperation for decades.

While they’ve run neck-and-neck when it comes to producing passenger aircraft – Airbus topped Boeing in 2019 and 2020 after several years in second place – there’s been one area where the Chicago-based Boeing has consistently outpaced its Toulouse-based rival: cargo planes.

Boeing has delivered 544 widebody freighter aircraft since 2000, compared to just 142 freighter deliveries by Airbus during the same period. Popular Boeing models include the 767F, which according to aviation data firm IBA is the “dominant aircraft” among widebody freighters, with a current total fleet size of 315 including both converted and factory-delivered aircraft, and another 26 slated for cargo conversion by early next year. 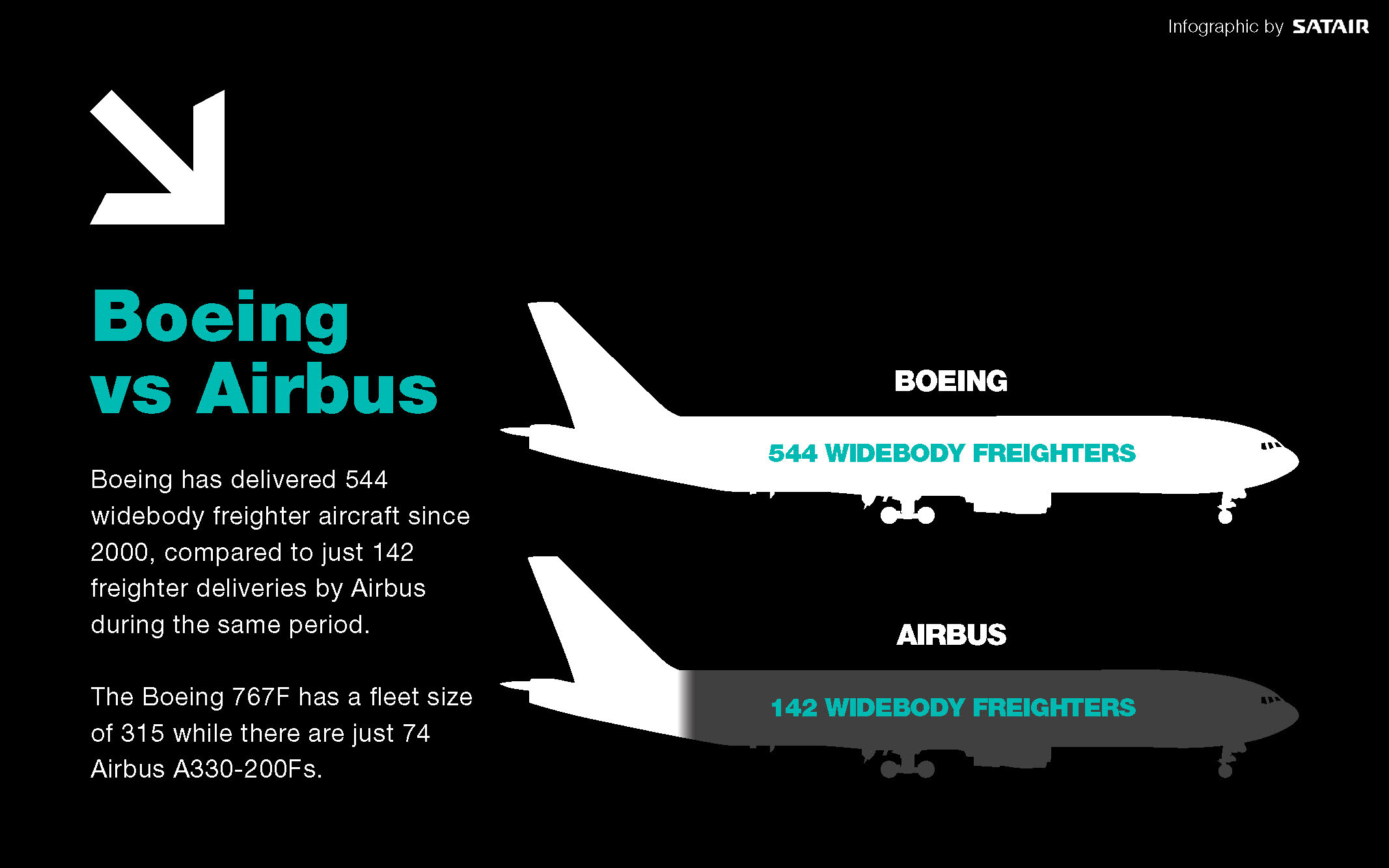 By comparison, only seven of Airbus’s equivalent model, the A330-200F, are scheduled to be converted into cargo carriers by 2020. The A330-200F has a fleet size of just 74 and of those, only half were ordered brand-new. Airbus hasn’t sold a single new cargo aircraft for almost six years and currently has no freighters in its order pipeline.

But with an air cargo market that’s currently hot thanks in large part to booming e-commerce and the distribution of vaccines and medical equipment, there are reports that Airbus is considering an A350F model to compete with Boeing’s 777F in the large widebody freighter fleet segment.

RELATED ARTICLE:
How a strong COVID recovery can worsen the aircraft mechanic shortage

Reuters reported in March that Airbus is gauging customer interest in a freighter version of its A350 widebody passenger jet in a bid to “penetrate the freighter fortress of its arch-rival”.

According to the report, the new model would be slightly longer than the popular Airbus A350-900 variant and would include a cargo door in its composite shell. Reuters estimated the development of an A350F at $2-$3 billion.

The investment could be tempting for the European manufacturer, given the current air freight market and the COVID-19 crisis’s negative impact on both traffic figures and new aircraft orders.

“Given the A350 production rate has been cut [...] and the cargo market is the one bright spot in the wide-body market, one would have to say the likelihood of an A350F has increased compared to a year ago,” Richard Evans, a senior consultant at Ascend by Cirium, told Reuters.

Would an A350F be better than a conversion?

With travel restrictions and health concerns crippling air travel, the belly space in cargo planes that typically carries around half of the world’s air cargo has been severely limited. The loss of air cargo capacity led to record freight rates and a rush by airlines to make up for some of their lost passenger revenues by carrying cargo instead. According to Cirium, 155 aircraft had all of or most of their passenger seats removed in order to transport cargo in their cabins between March and December 2020.

Converting passenger planes into freighters is a much cheaper option for airlines than buying new, and with so many aircraft grounded because of the crisis, the surplus of feedstock is an extra incentive for airlines to opt for passenger-to-freighter conversions (P2F) rather than invest in a new cargo carrier.

Airbus’s A330 has already proven to be a popular choice for conversions, accounting for nearly one-third of the 155 converted aircraft identified by Cirium. Although it’s a smaller model than a hypothetical A350F, a converted A330 would likely make for a more cost-effective and more immediate solution for airlines.

Through its modification program in collaboration with Elbe Flugzeugwerke, Airbus also offers P2F conversions of its smaller A320 and A321 models, but some industry analysts believe that the only way for Airbus to truly challenge Boeing’s cargo dominance would be with a larger aircraft that could compete with the Boeing 777.

Can an underdog knock out the champ?

But launching a large cargo model that could compete directly with the Triple Seven carries risks:

The company’s history with the cargo market may not win it much confidence. Plans to create a cargo version of the ill-fated A380 superjumbo never materialized as air freight carriers determined “an A380-F would be too fat to fly at a profit”.

Meanwhile, potential customers including Qatar Airways are clamouring for Boeing to introduce a cargo version of its new 777X, something industry experts predict the company would be more likely to do if Airbus goes ahead with plans for an A350F.

“The current cargo Triple Seven is an undisputed heavyweight champion, the 777X-F and the A350F could be coming for the belt. However, the Airbus aircraft will be the underdog in the fight,” Aerotime Hub wrote. “Airbus could be facing a monumental sales fight, with the question of whether both the Airbus A350F and Boeing 777X-F could co-exist together profitably.”

With an A350F nothing but a rumour at this point, Boeing’s dominance of the air cargo carrier market seems unlikely to change anytime soon. The current air cargo market and the lack of normally-available belly space may be enough to tempt Airbus to move forward with its reported plans, but it may not be the only company with its eyes set on Boeing.

The Chinese aircraft manufacturer Comac had a record year for deliveries of its ARJ21 regional jet in 2020 and is currently developing a C919 to compete with the Airbus A320 and Boeing 737 variants, while a C939 widebody that would go up against the A350 and 777 is expected to arrive sometime later this decade. The state-owned company is clearly hoping to make a dent into the Airbus-Boeing duopoly on the passenger side. If it finds success there, one can only assume that the world’s largest exporter country would also try to transport its goods on homemade cargo carriers, especially considering that annual air cargo growth in Asia is expected to outpace the rest of the world.