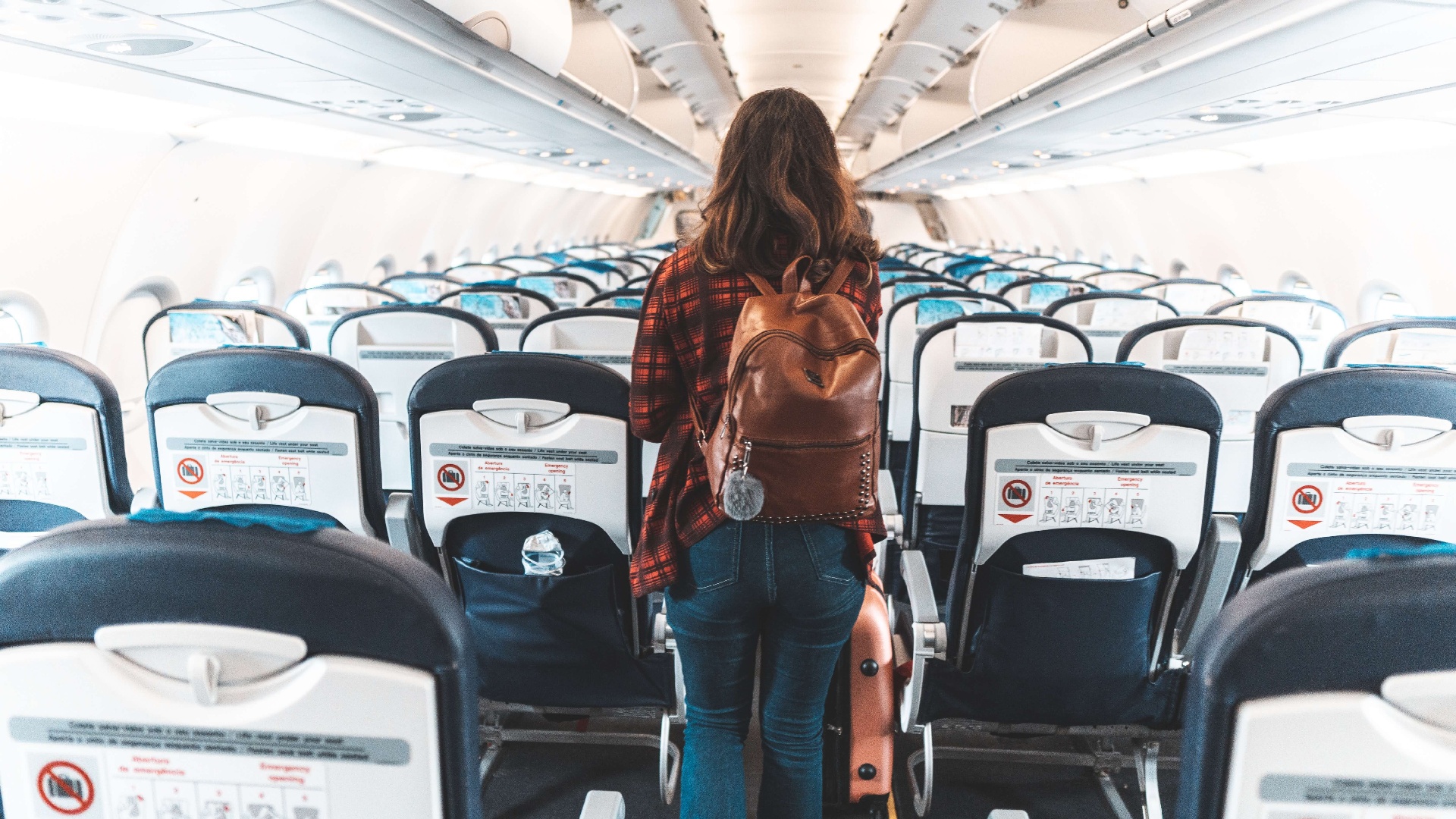 Addressing aircraft cabin air in a world of unseen elements

As the airline industry slowly begins to recover from one of the most significant global threats in recent history, addressing the passenger experience is going to be top of mind for major stakeholders. Chief among their concerns will be addressing cabin air and whether there is more that can be done to ensure the protection of passengers.

The long-time standard of using HEPA filtration in an aircraft recirculated air system has been a practical and effective way of removing bacteria, particulates and contaminants. However, with the increased public fear of the airborne spread of COVID-19 and other airborne and surface contaminants, there has also been an increased concern regarding safety when travelling within constrained space with hundreds of other passengers.

READ MORE ABOUT:
How can airlines reestablish public trust in air travel?

Scientific reports going back 20 years addressed the Cabin Environment and the Health of Passengers and Crew, all showing that bio-effluents, viruses, bacteria, allergens, and spores can be found in the air of a typical flight. These contaminants are shed from clothing or skin or expelled from oral, nasal, or rectal orifices.

Before the COVID-19 pandemic, most commercial aircraft had a passenger capacity between 175 and 540. That's about 175 to 540 different opportunities for bacteria, odours, viruses and particulates to mix with the cabin air. While this may seem daunting, the truth is, the level of air contamination would be the same if those same people were waiting at the airport.

HEPA (High-efficiency Particulate Air) filters have been the industry standard on most aircraft since the 1980s. Initially developed for the medical industry, HEPA filters are capable of removing 99.97% of airborne particulates. The keynote fact to remember here is that HEPA filters are specifically for filtering air, and do nothing for decontaminating surfaces.

In a recent article where we reported on EASA’s safety bulletin suggesting airlines check their cabin air filtration, we illustrated that current standard HEPA filtration “demonstrated good performance with particles of the SARS-Cov-2 virus size.”

Arguably, “good performance” is probably not enough to stem passenger lingering concerns, and new technologies are developing to work in tandem and enhance the effectiveness of cabin air recirculation systems that use HEPA.

Ionisation is one of nature’s regulatory systems, and a cutting-edge technology is currently leveraging that ionisation system to provide highly effective cabin decontamination. And it is designed specifically to work in tandem with an aircraft’s already existing HEPA filtration system. We spoke with Jonathan Saltman, President/CEO International Aero and member of Aviation Clean Air (ACA) about this technology and how it works:

Ions are all around us. Nature uses ionisation as a sort of checks-and-balances to control pathogens, allergens, airborne and surface particulate, and contaminants from upsetting the natural balance of the air around us.

In natural open-air, ion density can be anywhere from 400 to 800 ions per cubic centimetre. The advantage of ionisation inside an aircraft fleet is that we have an enclosed environment, so you can effectively increase that ion density through the ECS, or an environmental control system.

Ions, particularly negative ions, attack pathogens by severing the hydrogen bond around the lipid surface. This is the same regardless of whether the pathogen is viral or bacterial in nature. It renders the pathogen neutralised by removing its ability to reproduce, thus making it no longer infectious.

READ MORE ABOUT:
Could ionisation be the cabin environment mitigation we're looking for?

Ions are pushed out into the cabin to neutralise pathogens. Then, the current HEPA filtration system captures those inert pathogens and removes them from the cabin air. In other words, ionisation of the cabin air and surfaces acts as an extra safeguard, neutralising the pathogens before even reaching the HEPA filter.

Other solutions and their challenges

There are other solutions that are being tested for further success in decontamination cabin air environments, and while they each provide some effect, they also present different challenges.

UV light has been proven to eliminate viruses that can cause coronavirus and influenza and has been used in hospitals and labs for disinfection for years. However, this technology has not yet been tested in the treatment of cabin surfaces. In addition, the process requires the manual operation of sweeping UV light emitters over surfaces to disinfect, leaving the chance that some surfaces could be missed or overlooked. Most importantly, this method does nothing for neutralizing any pathogens in the air, as they are not designed to do so.

Similar to UV lighting, this is a manually operated procedure that would need to be performed by the crew, and similar to UV is also not designed to decontaminate cabin air, and is subject to human error. More specifically, there could be contaminants present on hard to reach surfaces, which could still act as infection points for passengers. There is also no data on what the long term effects of electrostatic fogging on aircraft cabin materials.

It was reported in FlightGlobal in June, that airlines could use the aircraft’s interior heating as a method of killing coronavirus and other biological contaminants. However, this test was conducted for use in military aircraft and required the heating of 50C for a six-hour period in order to show any effective result. It is not likely that this solution can be replicated for commercial aircraft.

Arguably, rigorous manual cleaning of individual surfaces is currently being done amongst airlines; however, there is no standard between the various methods and cleaning chemical agents being used. Not to mention that this process does nothing to address cabin air, and is the most time and labour intensive. 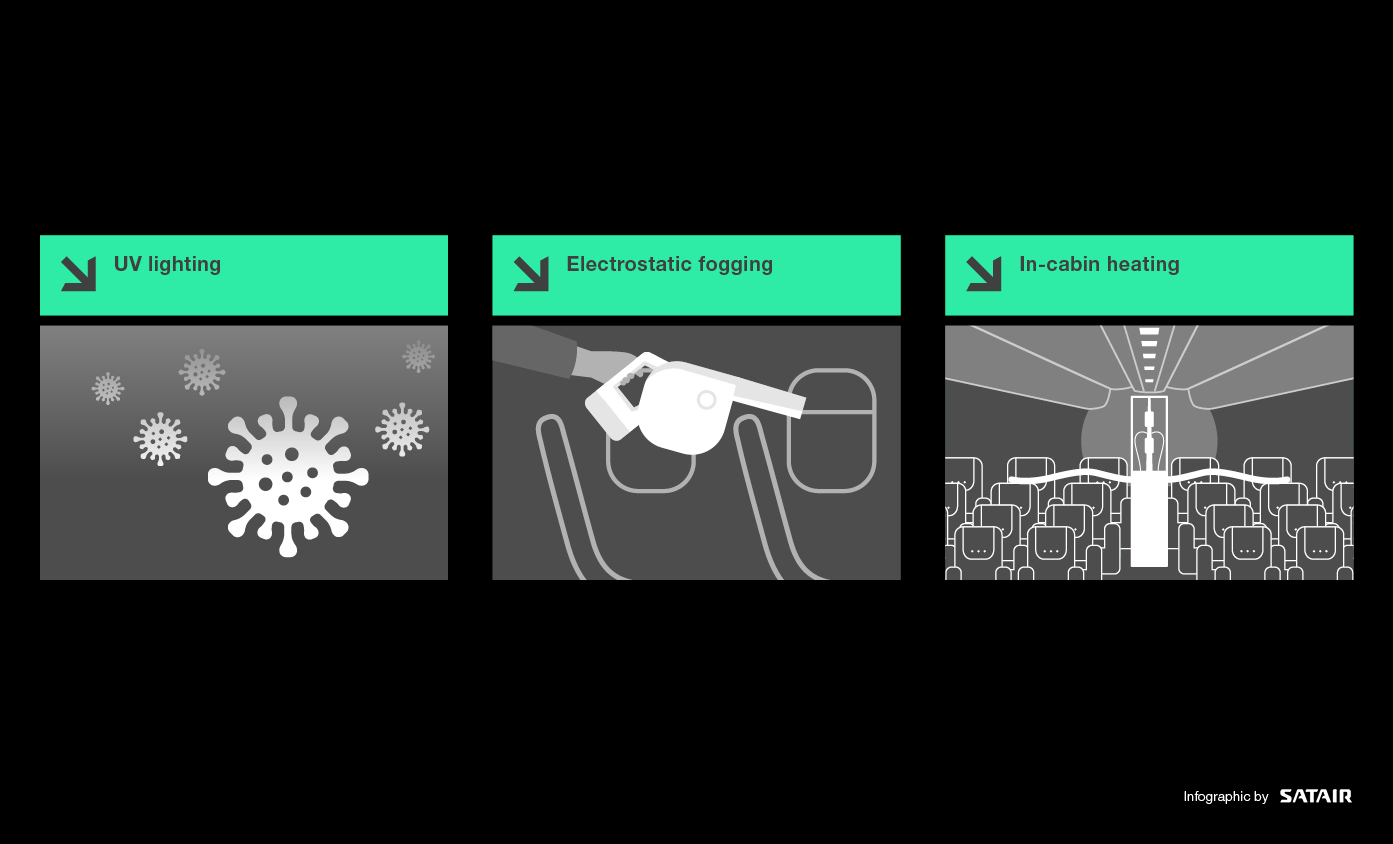 Looking towards the future of airline travel, the airlines that will gain clear competitive advantage will be the ones that take proactive measures to increase safety and decrease passenger concern—all while future-proofing their business with new technologies.

Current guidelines in regards to cabin air, such as those released by ICAO, only state the perfect operation parameters based on current operation standards. No mention of implementing new technologies is mentioned. And while these recommendations are without doubt, they are arguably meant as a baseline for safety operations. However, the differentiators in the industry as we move into the future will come from those who took extra measures beyond the baseline standard.

What are the current, biggest travel concerns for passengers?